There’s a new book out called Free Public Transit: And Why We Don’t Pay to Ride Elevators.

On Monday, May 21st, the Transit Riders Union is hosting a book launch and a panel discussion of past, present and future efforts to advance the vision of free public transit here in the Seattle area. The event will be held 6:00-8:00pm at University Bookstore, 4326 University Way NE. You can RSVP on Facebook here. 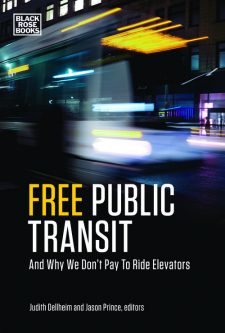 Panelists will include Rosalie Ray, author of one of the book’s chapters; Ifrah Abshir, a leader in the successful campaign to win transit passes for Seattle public school students; City Councilmembers Mike O’Brien and Teresa Mosqueda; and several more guests. I will emcee the event.

The book explores the winning strategies and pitfalls of case studies of free public transit ranging across thirteen countries: the United States, Montreal, Toronto, Estonia, Greece, Italy, Sweden, Brazil, Mexico, Poland, China, France, Belgium, and Germany. As much a manifesto as a guide, this explosive book, the first ever on the topic in English, is written for those who want to truly revolutionise their city and move it forward.