Skip to content
It appears we’re not going to get a formal study of building the Midtown Station on 8th Avenue, much less further up First Hill. However, a little searching can give us an idea of costs and benefits. Call it the discount version of the study Sound Transit will refuse to give us.

Oran’s mapping software estimates an 8th & Madison alignment as adding roughly 0.09 miles, or 475 feet, to the length of the tunnel. Taking the experience of the Beacon Hill Project, a TBM can cover 50 feet per day, so that’s 10 more days of boring operations. This source suggests TBMs cost about 5m Euro per month, so that comes out to roughly $2m in additional expenditure.

Lastly, an 8th Avenue station would be deeper than at 5th, and therefore more expensive. Back in 2005, the entire Beacon Hill project (both station and tunnel) cost $305m, which is $413m today. Roosevelt Station cost $151m in 2018 dollars, and can be considered a floor for what the 5th Avenue choice would cost. Thus we can place a ceiling on the station cost differential of $252m, and estimate the total cost of moving the station from 5th to 8th at no more than $316m.

Ridership predictions are difficult, even with a professional model. They become harder when it’s not clear what to measure: is it enough to compare boardings at each location? What if those riders are cannibalized from the existing Link stations? If they’re taken from the bus network, how do we measure the improvement in quality of life for those riders even if they don’t take a car off the road?

Rather than try to answer any of these questions, I’ll use two considerations. First, walkshed: 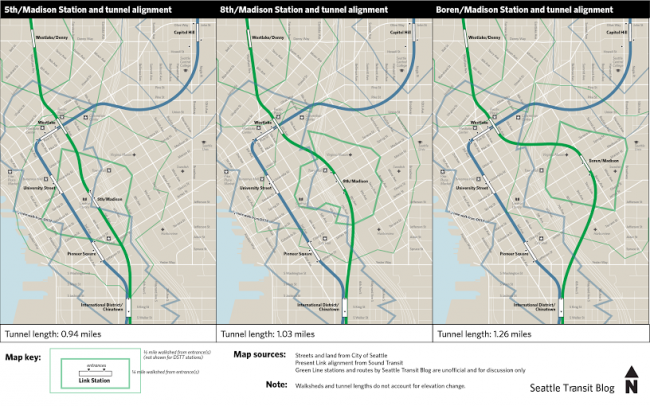 Oran’s map tells us a lot. Even though the downtown core is denser than First Hill, many of those buildings are within the 1/4 mile golden radius for transit, and all of them are within the less-optimal 1/2 mile. Building another station to shave a block or two off that walk will do little to change outcomes. A mere 3-block move makes the 1/4 mile walkshed almost mutually exclusive.

Second, existing transit demand. Consider the 2016 Commute Trip Reduction (CTR) Survey produced by Commute Seattle. The SOV share is a good measure of how well current transit options are getting people out of their cars: 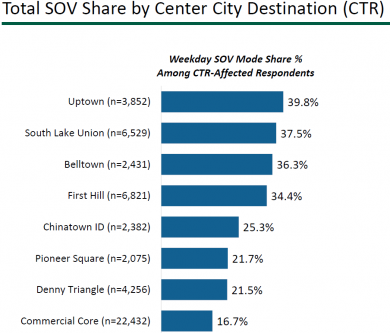 ST3 will serve the top two of these. The geography makes it hard to gather Uptown, South Lake Union, and Belltown into a single line, though most of Belltown will be able to walk to a station. These results show us that First Hill is both large and inadequately served by current transit. A 5th and Madison station doesn’t do much to bring the big First Hill employers inside even the half-mile walkshed of Link. Instead, it will exclusively serve a Commercial Core that is at the point of diminishing returns in discouraging SOV commutes. And not only that: the Seattle neighborhoods that generate the most cars going to First Hill will be in the Link system.

A Green Line station on First Hill would provide a one seat Link ride to SLU, Southeast Seattle, and Ballard, 3 of the six top car-generating neighborhoods. Two of the remaining three would be a Link transfer away. A 5th Avenue Station forces a transfer to BRT, which is not nearly as likely to bring these numbers down. 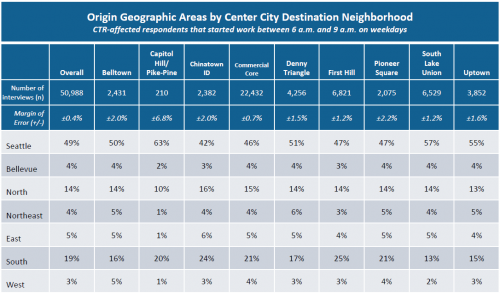 A First Hill Station would directly connect with the SR99/I-5 corridor via Link and would be one subway stop away from the Sounder terminus. Sounder is already the mode for 25% of Center City workers coming from the southern suburbs. For them, a 5th Avenue stop would be either two transfers or a circuitous ride on the streetcar to cover the last mile to First Hill.

Perhaps we can’t afford project scope increases in the low hundreds millions of dollars because of shenanigans in both Congress and the Washington Legislature. If so, Sound Transit has been wasting a lot of time exploring options that will never see the light of day.

If not, the evidence we have suggests there is no higher cost-benefit ratio before us than to bring the major employment centers on First Hill into the Link system, which would (almost incidentally!) also connect one of the densest residential neighborhoods in the state. To not investigate further would be negligent.