The latest update to Lyft’s app will include a trip planning feature designed to encourage passengers to consider combining rideshare or carpool with transit, walking, and bikeshare. The move comes as part of a large push by the ride hailing company and its arch-rival, Uber, to try and capture a share of the first mile/last mile market. The service will go live by the end of June.

Lyft has won contracts with agencies around the country to provide final mile service, and recently launched pilot final mile programs on Mercer Island and in Pierce County. Eventually, ride hailing services could reduce the need for park and ride spaces.

“If we can get more people to solve the first and last mile problem with rideshare, that’s good for us. Ultimately, if that gets more people on light rail, or taking buses, that’s good for the environment, and that’s what we’re about,” says Todd Kelsay, Lyft’s general manager for the Pacific Northwest.

According to Kelsay, the update will incorporate a dynamic trip planning algorithm that uses real-time arrival data. Customers will be able to compare the estimated price and time of a trip that drops them at a transit stop with other Lyft services, like point to point rideshare or the Lyft Line carpooling service.

At the moment, the service will be limited to a trip planning feature, but Kelsay says that the company is open to the idea of incorporating transit fare payment in the app. Kelsay says that Lyft communicates with transit agencies “all the time,” and cited a recent conversation with Metro about the trip planning feature and “pilot programs we run.”

The project is a worthy experiment that could boost ridership, especially in suburban areas. But pick up and drop off in dense areas could frustrate transit users and operators. Near the Union Station hub, for example, rideshare drivers often block a lane of traffic on Jackson in order to on or offload passengers to one of the curbside lanes. In the process, they can delay multiple bus lines. It’s easy to imagine Lyft drivers entering restricted areas, like a bus lane or a bus bay at a transit center, and disrupting the entire network in the process.

Lyft can encourage drivers and passengers to pick up and drop off in specific areas using geolocation. Lyft already uses geolocation to coordinate rides originating from SeaTac Airport and major events. Kelsay says that some, but not all, major hubs will have pick up and drop off zones in place when the trip planning function goes live. Kelsay said that Westlake and King Street Station will have geolocation at launch.

“[Geolocation] is our preference,” Kelsay said. “Typically, we set up a venue function so that when you’re at the Mercer Island Park and Ride, for example, the app will know where you are and tell you to put your pin down where it’s safe and efficient.” 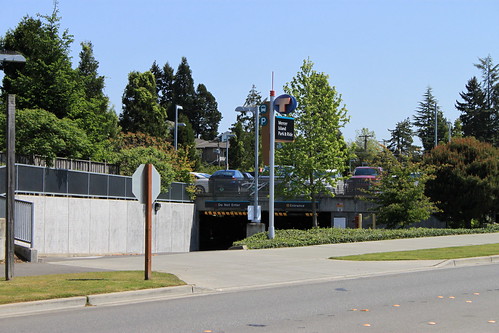 Hopefully, the trip planning feature succeeds on the level of the pilot first/last mile rideshare program on Mercer Island. At the end of March, the city of Mercer Island began spending $20,000 on Uber and Lyft rides to and from the Mercer Island Park and Ride, as part of a $226,900 last mile program. The money is a small portion of the settlement the city won from a lawsuit against Sound Transit over East Link’s right of way.

During the program, passengers will be charged a $2.00 flat rate for any Mercer Island ride that originates or terminates at the Park and Ride. Starting in August, the fare structure will shift to incentivize carpooling. The single passenger flat rate will rise to $5.00, but Lyft Line and Uber Pool carpool trips to or from the park and ride will cost $2.00.

The early returns of the Mercer Island Park and Ride program are promising, according to Kirsten Taylor, a city of Mercer Island senior project manager. Taylor says that, though the program hasn’t run for long enough to create a meaningful sample size, anecdotal evidence suggests that a new segment of commuters are riding the bus.

“One of the really neat revelations we’ve heard so far is from people who haven’t used any rideshare or bus transit during weekdays, because they couldn’t figure out how to make a connection with the lack of parking in downtown [Mercer Island] or in the park and ride. We’re getting new riders,” says Ross Freeman, Mercer Island’s sustainability manager.

Metro officials are monitoring the ride share and the the flexible-route, demand-responsive Route 630. Both modes are designed to appeal to commuters who gave up trying to find spaces in the at-capacity Park and Ride. If the success continues, Mercer Island’s rideshare and route 630 could be models for new services designed by other cities and Metro to lure car-dependent commuters to other modes.