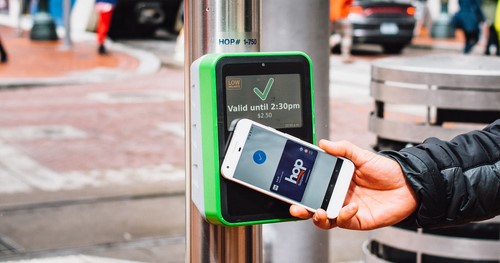 Portland TriMet recently rolled out the first-of-its-kind-in-the-US “virtual” smart card. The virtual Hop Fastpass account requires use of GooglePay on an Android smartphone, but doesn’t require getting or using a physical Hop Fastpass. The smartphone accessing the account provides all the functionality of the physical Hop Fastpass, using the same motion of briefly holding the phone against the card reader.

TriMet has become the US transit industry’s leader in accessible fare collection in multiple ways:

TriMet is trailing the industry in one regard, though: the price of its smart card. TriMet charges the third-highest fee in the country for its transit smart card – $3 – with only the ORCA card and Anchorage People Mover’s Smart Card (each $5) costing more. As I’ve documented multiple times, the industry standard is to make transit smart cards available for free, or free after rebating any fee into the card’s e-purse.

Now, citing what reads like a bizarre social justice concern troll, TriMet is charging for the “virtual Hop Fastpass card”, even while saving the cost of producing and distributing physical cards.

To keep the Hop system equitable for all users, virtual Hop cards will cost the same as physical Hop cards – $3. To date, TriMet has distributed more than 90,000 Hop cards free of charge at community events and to community-based organizations and employers.

I contacted TriMet to see if there were more reasons for the $3 virtual card fee. Spokesperson Tia York got back to me with an answer:

The cost of card, $3, whether purchased in-store or through Google Pay, is to help maintain a convenient retail network for our customers. In less than a year, TriMet has grown the retail network from 150 to more than 400 locations where Hop cards can be purchased or reloaded. The value of this retail network is that it provides hundreds of locations where riders can load funds to their cards with cash. This helps bring equity to the system because it means you can use Hop, even if you don’t have a bank account. At the same time, it reduces the amount of cash in our system.

Hop increases access to transit in the Portland metro region with its unique fare-capping feature. With Hop, riders earn passes as they ride, instead of having to come up with the total cost of a day or month pass at the beginning of each month. Riders take one ride in the morning and tap for a 2 ½ hour ticket. When they’re going home in the evening, they tap again and earn a day pass. Once a rider reaches the cost of a month pass, they ride the rest of the month for free. Hop guarantees riders never pay more than the purchase price of a pass for their fare. It also ensures they won’t pay for rides they don’t take, due to illness or other unforeseen circumstances.

In addition, we determined it would be more equitable to charge $3 for the physical and the virtual cards, knowing some of our riders do not want or do not have a smartphone.

I should mention that the $3 fee is waived for individuals who enroll in our Honored Citizen program at TriMet’s Ticket Office, a requirement for riders who qualify for Honored Citizen fare based on low-income or disability. And one more note… as of February, TriMet had distributed 92,000 free Hop cards, with the intention of handing out tens of thousands more.

The ORCA pod has figured out an answer to the critique that free cards could be treated as disposable: Just make the first card free for each recipient. TriMet almost figured out an even more elegant solution: Offer a free account on smartphones, to save the cost of producing and distributing a card. The answers I got from TriMet were ambivalent as to whether TriMet prefers fare payment by card or smartphone.

So, the question arises as to whether Next Generation ORCA will repeat TriMet’s blunder. Fortunately, per Sound Transit spokesperson Scott Thompson, the pod has not taken up the question of NGORCA fees yet.