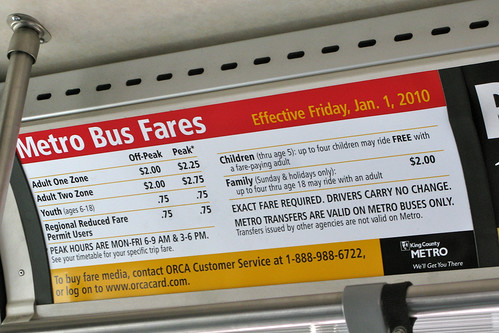 While King County Metro may be the #1 transit agency in North America, it’s also one of the most expensive to ride. While it’s great that the agency is on surer financial footing than a decade ago, and it’s great that ridership is booming, perhaps it’s time to consider a fare cut.  Such a move could encourage ridership even further and reduce the burden on lower-income riders who can’t (or don’t want to) take advantage of ORCA LIFT.

As recently as 2007, a peak 1-zone trip cost $1.50. Today that same trip will set you back nearly double — $2.75 — more than $1.75 for a bus in LA or $2.25 in Chicago.   Today’s fare is at the top end of expensive American cities – in league with New York an San Francisco.  In some ways even that comparison undersells Metro’s premium: in New York you can get a subway ride for the same amount, and SF Muni offers a $0.25 discount with a farecard.

Today’s Metro fares are above historical averages.  As you can see in the chart below, fares hovered around $1.50 (adjusted for inflation), jumped to $2.00 in the early 90s, then shot up in 2007 and have hovered north of $2.50 ever since. 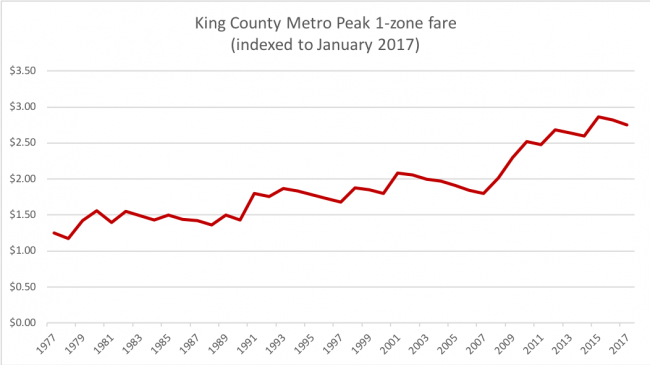 The post-2007 jump was, of course, followed the Great Recession.  As we documented, Metro made a decision to increase fares instead of cutting service.  Today, however, revenues are back up. The city of Seattle is pumping money into the bus system, tax revenues are increasing, and the agency can’t find enough drivers or base capacity for all the buses it wants to put on the road. Since 2009, Metro has exceeded its 25% farebox recovery target. At the same time, many workers are seeing all their wage gains wiped out by inflation.

Last year’s fare reform raised prices for urban commuters while decreasing them by 50 cents for suburbanites.  One reason cited was the “suburbanization of poverty” — people are being priced out of the city and into the second zone, only to face a higher bus fare (on top of a longer commute).  But Zone 1 has its share of low-income riders as well.  For their sake, and to encourage more people to ride transit, the agency ought to consider a fare cut.  Or, at the very least, let a few more years of inflation eat away at the current fare so that it falls back in line with its historical average.

I won’t pretend to have done the analysis on how exactly this would affect Metro’s budget, and there’s much more to fare policy than just finance (see Martin’s thoughts here and here).  But it’s quite apparent that fares are (a) quite high relative to other American cities and (b) higher than Metro’s own historical norm.  Lowering the fare in this era of fiscal abundance would bring it closer in line with the historical average.  It would make life in the region a bit more affordable for those with lower incomes, and maybe convince some folks on the margins to ditch their cars.

As Puget Sound residents become acclimated to the new reality of late-July “smoke season,” and other unfortunate aspects of climate change, making it easier to ride transit seems like the least we can do.

2010 Metro Bus Fares by Oran from the STB Flickr Pool