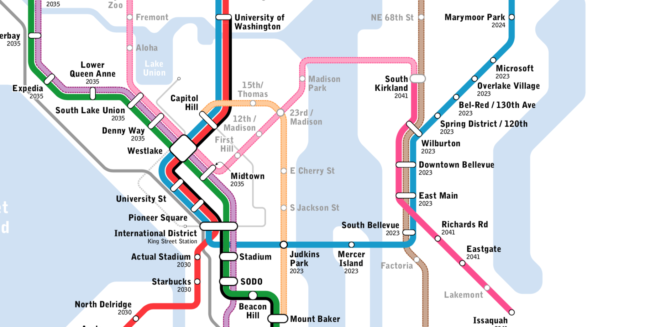 Sound Transit is currently gathering public input on the ST3 Level 2 Planning options they presented a few weeks ago. As we noted early this year, this is an opportunity to make light rail exceptional and the difference is all in the details. At this phase it’s time to apply the concepts of reliability, expandability, and accessibility and make some choices.

Our recommendations make a central assumption: There will not be additional funding available for the more expensive options. This might change sometime in the future, but considering what is happening with our federal, state, and local government it’s pretty safe to say that it won’t happen before the preferred alternative is selected in early 2019.

As we have said in the past, a reliability-killing drawbridge should be excluded from consideration. Luckily, Sound Transit seemed to hear the public feedback on that front and proposed few drawbridge options. Several of the options are on 14th NW, which unfortunately fails on the accessibility front. 14th NW has poor transit connectivity potential and most residents and attractions are on the west side of 15th NW. All 14th options should be excluded at this level.

That leaves one viable option in this round. The static bridge and station on the west side of 15th Ave NW. With the right station access improvements, such as a pedestrian bridge from the east side of 15th Ave NW and to the north side of NW Market, this station would score very high on accessibility for its pedestrian/bike connections and excellent transit connectivity. We would like to see Sound Transit plan ahead here and integrate the station and guideway into future transit oriented development (TOD), the station area is currently low rise businesses.

The Interbay options are more notable for what should be excluded than what should be included. Any alignment along 15th W should be excluded in this round — it would disrupt businesses and a corridor that is heavily used by existing transit — and there are other better options along the BNSF corridor nearby. The Thorndyke station should definitely be included as it has the best transit-integration and TOD potential. Sound Transit should be thinking about how best to bring riders from Magnolia and Seattle Pacific University to this station. A new walking and biking connection to Magnolia is necessary from Interbay. The ease of transfers to buses serving both destinations and the speed and reliability of those bus routes will matter a lot.

Closer to both Expedia and the cruise ship terminal seems like the best bet here. With the added goal of reducing transit impacts on Elliot Ave W in the interim, any of the stations west of Elliot seem best.

The Queen Anne station to the  west of Seattle Center appears to be the best option. Beyond easy Seattle Center access it’s a very good location for transit connectivity and the walkshed would cover a lot of dense existing development. The walkshed has the added upside of capturing part of north Belltown, a neighborhood we believe should have its own station.

While we understand the desire to move Denny station and SLU station further apart, one station stands head and shoulders above the others on transit, pedestrian, and bike connectivity here: Harrison. The station will straddle Aurora so that there will be direct bus transfers in both directions on Aurora and it will also open up the Bike/walkshed on either side of Aurora.

Between SLU and Denny

The region is building a brand new tunnel with massive potential capacity. This tunnel MUST include features that enable future expansion north along the Aurora corridor.

With a Harrison station in place this station should be oriented more towards central downtown with station entrances on either side of Denny Way. We are agnostic about the relative benefits of a Terry or Westlake alignment. Terry is more out of the way and a bit closer to the rapidly growing Denny Triangle neighborhood. Denny is flat and more central and a bit closer to booming north Belltown.

The key element of this station is easy transfers between the current and future Westlake station. Westlake is already the busiest station for Link and making it the primary Link north transfer station will multiply that popularity. The options on 6th aren’t bad, but the 5th options offer the potential for a perpendicular stacked station with close direct underground transfers.  With the right details a new Westlake station under 5th could be an exceptional and easy to navigate experience for riders.

Midtown/Madison Station
A Madison station on 5th Ave lines up better with a 5th Ave-aligned Westlake station and means a slightly better walkshed and opens up an exciting option: A flat pedestrian walkway to the deep station from the bus corridor on 3rd Ave. 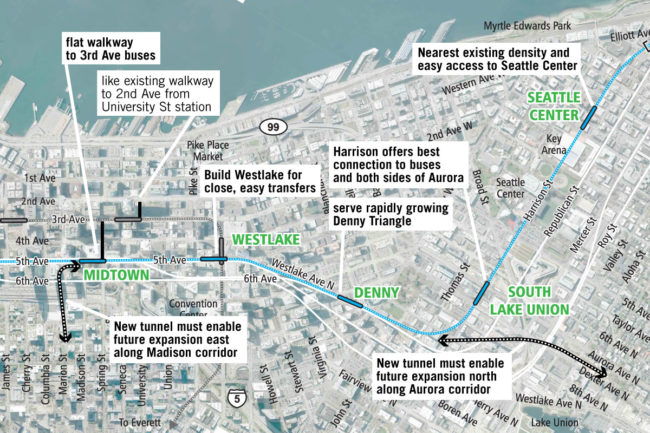 The blue line is a good approximation of the best options presented in this segment/phase.

Between Madison Station and ID Station

The region is building a brand new tunnel with massive potential capacity. This tunnel MUST include features that enable future expansion east along the Madison corridor.

The key element of this station is easy transfers between the current and future ID stations. A 200-foot-deep station would be twice as deep as UW station would mean relying on elevators or very long banks of escalators to move between the stations. That is simply not acceptable for a high volume station like this. Due to the very high costs associated with the 4th Ave stations, the only viable option here is the 5th Ave cut-and-cover station. The station would create an incredible, if not iconic, transit hub with close multimodal connections. Sound Transit should work with International District businesses to find ways to mitigate the business impacts. For example: It may be possible to do most of this work with the station covered, which would preserve the uninterrupted pedestrian environment that is crucial to local businesses.

The only option that preserves the E3 busway, Ryerson Bus Base, and creates new transit connectivity is the Occidental/SODO alignment. This alignment would also include reliability upgrades:  A car bridge over the current SODO station for higher and vacation of Royal Brougham. A new SODO station would serve existing businesses such as the Starbucks Headquarters and has future TOD potential as well.

The promise of the West Seattle stations center around transit connectivity. Do the stations right, and seamless direct transfers will allow a massive upgrade for transit across the peninsula. West Side Delridge elevated option appears to be the clear winner on this front.

Of the two options that weren’t astronomically expensive, the elevated Oregon Street/Alaska Junction option is much better for future expansion. We reached out to Sound Transit as they had rated this option lower on expandability, but learned this was only because of issues related to the built environment that would be present with pretty much any elevated option. While the bus integration would not be as good as direct transfers, the station area is sufficiently walkable to make this a very good transfer environment. 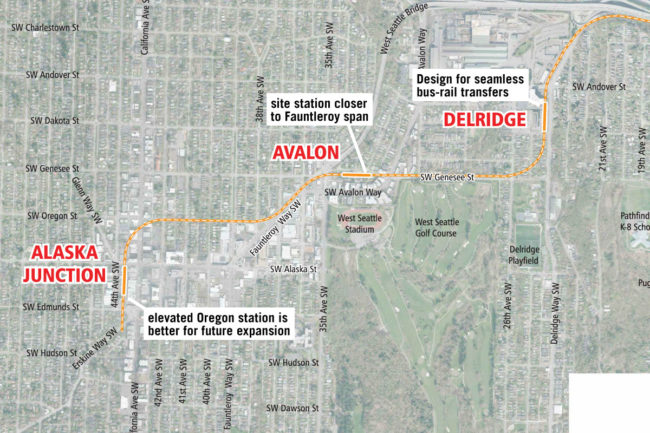 The orange line approximates the best options in this segment/phase

Get your comments in now!
There is still time to get your comments in to Sound Transit, but not much: The comment period for level two closes this Sunday. Though we are limiting this response to options that are affordable without an additional funding source, it’s worth noting that the preferred alternative selected now is not the only alternative Sound Transit will study in the EIS. We also urge Sound Transit to study upgrade features so that, in the case the political landscape changes in the next few years, we are prepared with a plan to take advantage.