The Sound Transit Board failed to advance 20th Avenue NW in Ballard to Draft Environmental Impact Statement Study. Sound Transit must study a Ballard station in the heart of Ballard.

For many reasons that Seattle Subway has laid out previously, Sound Transit must reopen study of a Ballard station that serves the heart of Ballard. Both Sound Transit’s proposed 15th and 14th Avenue NW station options fail to serve the heart of Ballard and Sound Transit’s prior study of a station at 20th Avenue NW confirmed that it would serve more people and have better transfers. Providing accessibility for the most visitors, workers and residents is fundamental to a good transit investment, and Sound Transit seems to have forgotten. We need your help to remind the Sound Transit Board of this at their upcoming meetings on July 7th, 14th, and 28th. 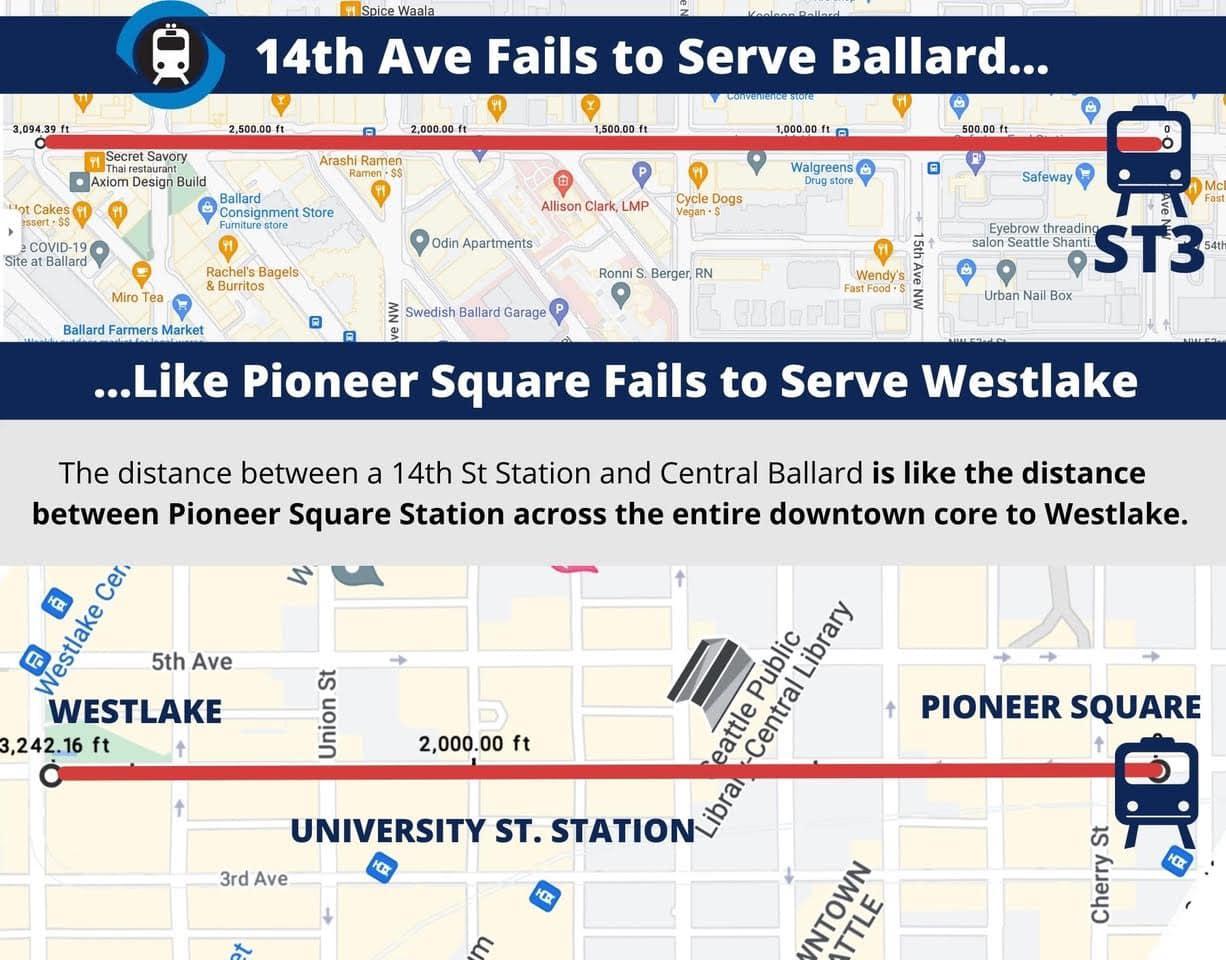 What originally put the 20th Avenue NW option on the back burner? At the time, Sound Transit thought it would cost far more. However, things have changed since then. After further study, previously-large cost differences between tunneling and elevated have shrunk dramatically. We don’t have updated costs for 20th Avenue NW with a Thorndyke portal, and we need it.

What’s more, there is city-owned land and rights-of-way near 22nd Avenue and NW Market that could be offered to Sound Transit for stations, reducing cost. Sections of smaller side streets could be permanently closed and transformed into station entrances that double as public spaces and pedestrian safety infrastructure, and less property may need to be demolished. These kinds of solutions aren’t crazy–they’ve already been proposed by Sound Transit as cost-cutting concepts at Denny Station. So why not in Ballard, too? No one would suggest closing Ballard’s 15th Avenue NW, a regionally-critical primary North and South freight, transit, and vehicle corridor with on average 36,000 vehicles using it daily according to a 2019 report by SDOT. But using rights-of-way and city-owned land for stations that serve the heart of Ballard is possible further west, in the heart of Ballard.

Help us convince Sound Transit to reopen study of 20th Avenue NW, or 22nd Avenue NW and to look at city-owned land and rights-of-way for entrances; otherwise, Sound Transit’s own study indicates future transit riders in Ballard will be left behind.

As of now, the Sound Transit Board doesn’t believe Ballardites care about light rail access to the heart of Ballard. Make your voice heard at the July 7th, 14th, and 28th Sound Transit Board meetings to make an impact. Otherwise, Ballard’s fate is decided.  Tell the Sound Transit Board the path forward is clear: don’t bail on Ballard, reopen the study of a 20th/22nd Avenue NW Station in Ballard with a Thorndyke Portal in Interbay so we can make informed decisions about this transit infrastructure that will last centuries.

Sign up to testify; or click here to send an email today, just add your name at the bottom.

62 Replies to “Call to action: tell the Sound Transit board to reopen study of an ST3 Link light rail station in the heart of Ballard”