The Puget Sound region’s extreme growth hasn’t gone over well with some residents. (To put it mildly.) That backlash has caused some frustrating policy snags, like the lawsuit that has placed Seattle’s MHA upzones on hold.

But construction in Seattle continued on plenty of multifamily projects. That hasn’t always been the case in the rest of King County. In recent years, several suburban cities, including Issaquah, Sammamish, and Federal Way, halted construction on new projects by enacting construction moratoria.

Under the Growth Management Act, a city can pause work on any or all kinds of new projects by enacting a construction moratorium. The power is broad, but not unlimited. A city has to cite specific detrimental impacts caused by new construction, and use the period of the moratorium to enact code changes that address the problem. A moratorium only lasts six months at a time, but can be renewed indefinitely. Issaquah, for example, renewed its moratorium three times before letting it expire earlier this year.

You might think that those laws are the product of NIMBYism. In some cases, that’s true. But the reality is more complicated.

END_OF_DOCUMENT_TOKEN_TO_BE_REPLACED

We’ve become accustomed to fast growth, averaging 15 thousand new residents in Seattle annually between 2010 and 2015. So it’s impressive how Seattle has stepped up its game to add even more residents. As Gene Balk observed yesterday, Seattle is only the second top 50 city to grow more than 3% in one year this decade (the other was Austin in 2012). 3% growth in a mature city is a big deal.

Demand for urban living is strong, as evidenced by high prices for homes in walkable neighborhoods all over the US. But most cities have a hard time delivering those homes. Curbs on urban growth push many involuntarily to the suburbs, and most metropolitan areas are still becoming more suburban. More so than any large American metropolitan area, Seattle has densified as it has grown.

Seattle accounted for a massive 58% of all King County growth in 2016. Seattle’s acceleration was matched by a slowing of growth in many King County suburban cities. Total growth in King County in 2016 was about the same as 2015. A few cities on the central Eastside performed well. Bellevue (+1.3%), Redmond (+3.2%), and Issaquah (+3.6%) all showed healthy growth rates. But the rest of King County had its weakest growth since the recession, and expanded just 0.8%. END_OF_DOCUMENT_TOKEN_TO_BE_REPLACED

Sound Transit and Kirkland are considering a possible light rail station at the South Kirkland Park-and-Ride. After the draft system plan was released on March 24 without the hoped-for service to Kirkland on the Eastside Rail Corridor, the Eastside Board members wrote the city suggesting study of a short rail extension to South Kirkland. Staff analysis on both sides is underway.

Preliminary analysis envisions extending the planned Issaquah line from Wilburton to South Kirkland along the ERC. The travel time to Bellevue would be 7 minutes. The extension would cost $307 million, serving 2,500 daily riders, perhaps truncating some Metro routes. A 500-stall parking structure would add another $28 million to the capital cost.

The symbolic relevance of the proposed station is obvious. For Sound Transit, it suggests the Issaquah-Totem Lake rail line will be completed in ST4 (the draft plan also includes an environmental study of transit on the corridor). For Kirkland too, it’s an affirmation the city will finally see high-capacity transit in ST4, though rail rather than the BRT which the City expects would be more productive. For homeowners who opposed transit “on the trail” in ST3, it means transit plans were not defeated, only deferred.

Pending a future transit package, how would the spur line fit in the network? After all, this could be the terminus of the rail line for a long time. There are some obvious questions:

Is South Kirkland a viable destination? The planned station mostly targets riders arriving via Metro routes from the north, along with drivers to the expanded parking facility. Current local land use is primarily office with extensive surface parking and little near-term redevelopment in the pipeline. On the other hand, proximity to Bellevue will surely help redevelopment before rail service begins (anticipated at the very end of the ST3 program in 2041). Zoned heights on the Kirkland side of the station max out at 65′. But, with few residential neighbors and an adjacent highway, the path to more aggressive zoning may not be difficult.

Added parking comes with well-understood trade-offs, but replacing some of the existing surface lot with a 500-stall garage would hardly be decisive. Both Kirkland and Bellevue (the P&R is mostly within Bellevue city limits) should be having a land use conversation, even if Sound Transit’s immediate analysis must rely on current PSRC projections.

What does the transit network map around a South Kirkland rail station look like? Most riders to Seattle would prefer a cross-lake bus to UW station in any scenario. Kirkland-Bellevue riders will be served by Rapid Ride (by 2025 per the Metro LRP). Would that be improved upon by having riders exit the bus to a train, with the associated transfer penalty?
END_OF_DOCUMENT_TOKEN_TO_BE_REPLACED

This summary of ST3 feedback from East King County (including North King other than Seattle) is the fifth in a series of ST3 feedback summaries. See our previous coverage of Pierce County, Seattle, South King County, and Snohomish County. A future installment will look at other Stakeholder Organizations.

The Eastside’s ST3 input is well coordinated. As happened last July, several Eastside cities signed a joint letter describing shared goals. Cities along the SR 522 corridor also submitted their own joint letter endorsing BRT on SR 522 and NE 145th St. Read together with the cities own letters, there’s an impressive consensus about what an Eastside ST3 package needs to look like.

Joint Letter of the Eastside Cities

The Eastside cities introduce their priorities by noting how they are “reshaping our regional growth centers and downtowns into dense, mixed-use, urban centers that need frequent and reliable transit service to sustain economic growth and viability. ST3 has the potential to create transit connections within the Eastside, and provide connections between the Eastside and the rest of the region”. The letter goes on to remind the Board that “the Eastside will be making a significant tax investment into the package” and looks forward to seeing commensurate investments back into the Eastside.

The Eastside’s five priorities in ST3 are:

END_OF_DOCUMENT_TOKEN_TO_BE_REPLACED 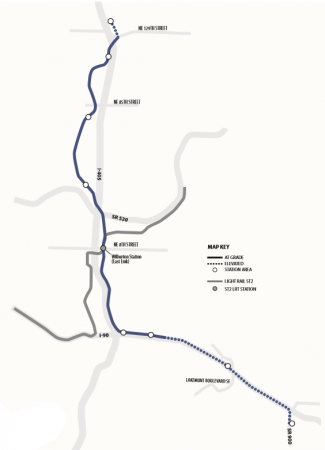 END_OF_DOCUMENT_TOKEN_TO_BE_REPLACED

Several Eastside cities (Bellevue, Redmond, Issaquah, Kirkland, Renton, Sammamish) submitted a joint interest statement to Sound Transit that lays out a shared vision for the ST3 project list. Each city also submitted comments with respect to their particular interests. The joint interest statement was developed in response to concerns that the draft PPL would serve the Eastside poorly, and that the relatively compact central Eastside needed a more comprehensive vision for regional mobility.

A plan for ST3, the Eastside cities argue, must do the following:

“Fund Eastside needs”: ST3 must fully fund investments necessary to meet Eastside transit needs. This is, of course, a shot across the bow of other regional leaders who have looked at the Eastside’s tax revenues as a funding source for spine expansion. Concerns about subarea equity were loudly voiced in several of the City Council meetings where letters to ST3 were approved.

“Connect the Eastside with the region”: Here the cities advocate for strengthened connections with the neighboring subareas, including I-405 BRT and Regional Express. The statement is careful to call out how these are multi-subarea investments, implying that East King should not bear the entire cost of I-405 BRT. With the BRT corridor likely to extend from Lynnwood to Seatac, a large portion now lies outside the East King subarea.

“Provide an integrated regional transit system with access enhancements”: The cities are looking for a regional network that integrates ST rail, BRT, express bus and Metro bus services. They also call for TOD and non-motorized access planning as part of ST3. Performance-based initiatives for more efficient use of parking are supported, adding capacity as needed.

“Support system expansion”: This is a call for planning and studies for future system upgrades (and for ST to plan facilities like OMSF early in the process).

The individual cities submitted their own comments, describing their particular needs in greater detail:

END_OF_DOCUMENT_TOKEN_TO_BE_REPLACED

A couple of days ago there was a great deal of discussion about the merits and costs of a Sand Point crossing. There are two things that a study would find out that everybody would like to know; the monetary cost of the crossing and the potential ridership over the connection. Unfortunately I can’t give any insight into those things. What I can to do is provide some tangible benefits based on travel time using Seattle Subway’s previous posts about the Crossing, Ballard Spur and Better Eastside rail.