Dominic Holden updates us on the continuing fight over the “gaping hole” at 40th & Stone Way, where local residents are fighting the development of a mixed-use QFC and condo project.

Here’s my question: when it comes time to sell their single family homes, how many of these folks who are currently fighting this development will turn around and put “walkable to the QFC!” in the MLS listing?

STB tipper Gordon sent a mail saying that Discovery’s Colossal Construction is airing a show on constructing the new South Ferry Station on the NYC subway’s 1 and 9 lines. Should be a good show. It’ll air tonight at 8 and tomorrow at noon.

Did the big dig actually ease traffic in downtown Boston? Maybe not:

Despite being a national embarrassment, advocates say the Big Dig has achieved its goal of alleviating traffic in Boston, and they’re right. In 1994, getting from one end of Boston to the other using the Central Artery took 15 minutes — today it can usually be done in three minutes or less. Back in the day, traffic jams on the the artery could last up to 14 hours a day. Today, the Big Dig tunnels are almost always clog free.

But move out from the center of Boston, and things don’t look quite as rosy. After examining scores of state highways records, the Globe concluded that at points north and south of the city, congestion has gotten worse since the opening of the Big Dig, sometimes quite a bit worse. At one 11 mile strip just north of the city, evening commute time has more than doubled, from 12 minutes to 25. Similar increases can be seen at other points outside Boston on the roads leading into the tunnels.

Why? Because with such a sleek, streamlined new highway in place, more and more suburbanites now choose to commute into Boston by car. That would be ok if the highways leading into the city from the North and South had been expanded in conjunction with Big Dig construction, but they weren’t. Prior to the Big Dig the main road into Boston worked like an hourglass — a wide pathway that narrowed as you approached the city, and then opened up on the other side. But now the shape has changed, with the road underneath Boston wide open, narrowing as you move north or south away from the city.

This is what we call “induced demand,” folks.

So I saw $1.99 gas at an Arco station the other day, making me think that people might start driving more.

Well, they might be buying more gas, but they aren’t driving more miles, notes Calculated Risk: 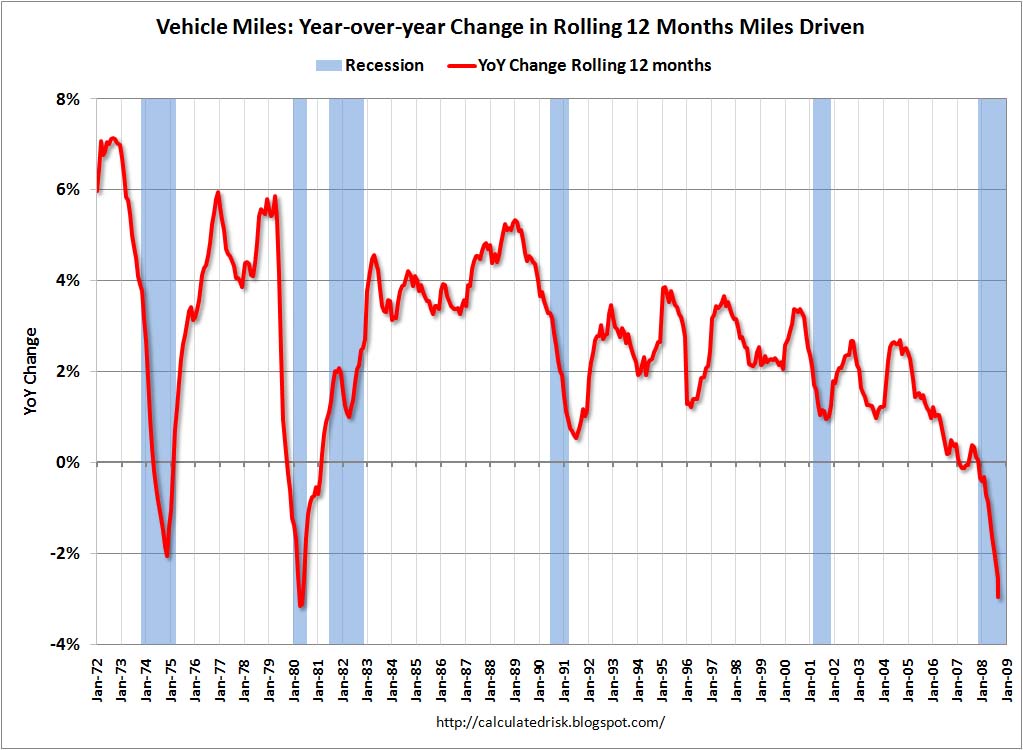 As the authors note, gas was still $3.50/gallon in September, so maybe driving will take off again next month. Somehow I doubt it. I wonder if WSDOT will revise their ever-rising estimates and eventually stop ignoring human behavior.

In case you’re not up on your acronyms, Sound Transit’s draft 2009 Service Implementation Plan is up on the web.  There’s over 100 pages of stuff; some of it (as the name implies) is the service plan for next year and several years afterward.  The big service changes in 2009 are the route modifications to the 554, 555, and 556.  You may not have heard this, but there’s apparently some sort of train opening up next year as well.

The real meat, however, is extremely detailed ridership data for every route in the system.  If you have a couple of hours to spare, it makes for pretty informative reading.

Contra Ben’s post, chalk me up as doubtful we’ll get anything out of Olympia. I gave up on that place a long time ago, and the current budget situation means we’re getting nothing for a good long while.  I’d be thrilled if they just fixed the bridges that are about to fall down.

On the other hand, President-elect Obama has declared his intention to put forth a $500 ~ $700 billion infrastructure plan that would generate some two to five million jobs.  To be an effective stimulus, of course, the money has to be spent soon, so projects that require years of public hearings aren’t going to be helpful. Obama has set a time frame of two years for for the projects.

Here’s a handy guide to some things that could be done right away, if only the money were in the bank, helpfully organized by Congressional District:

END_OF_DOCUMENT_TOKEN_TO_BE_REPLACED

We definitely need better coordination between transit agencies, even beyond implementing ORCA (which will be a huge first step). The goal should be a seamless “user experience,” to borrow a phrase from the software world, including unified fare collection, maps, schedules, etc.

I recall not too long ago walking into the Whole Foods on Denny Way and overhearing two people discussing the Seattle Streetcar. One said to the other, “oh, that’s the new Sound Transit thingy…”

Point being, most people don’t differentiate between agencies, and they shouldn’t be expected to. Agencies should create a high-quality experience across the board, since poor service by one will reflect upon them all. I think Andrew’s a bit off. He goes way outside of what would normally be considered the Bay Area. Rio Vista? Healdsburg? Cloverdale?? That’s 94 miles out of San Francisco, and 140 out of San Jose. Vancouver, BC is 110 miles out of Seattle.

We do have a bit more than four transit agencies here. An incomplete list of others that he is missing here: Everett Transit, the Seattle Streetcar, Amtrak, Intercity Transit and Island Transit. He is also counting specific branding of transit services in the Bay Area as separate agencies. In reality most of the agencies in the Bay Area are planned and governed under the Metropolitan Transportation Commission or Caltrans.

Enough with the nitpicks: he has a great point about ORCA. As our systems grow and become more and more intertwined, we need more and more coordination, and a more and more seemless experience commuting. It might be difficult to get a single agency in charge of transit in our area, as the MTC does in the Bay Area, but that doesn’t mean it’s not worth doing. END_OF_DOCUMENT_TOKEN_TO_BE_REPLACED

As reported by the Seattle Times, the Municipal League of King County has written a draft report outlining four ways to improve King County Metro and make it more fiscally solvent. As you may recall, Metro is currently facing a $90 million budget shortfall.

The four findings are:

The report does touch on Metro’s higher operating costs and labor costs compared to other transit operations. It also warns that these higher costs may be passed on to other agencies, as Sound Transit contacts some of its bus service and will contact all of its Link service to Metro’s operators. For its part, Metro has a detailed response that agrees with many principles of transparency and says that Metro’s operating costs are because it has much more long-distance commuter service compared to many bus agencies. Metro says its cost-per-passenger-mile is relatively low, which illustrates its focus on commuter service.

Definitely read the Seattle Times piece for a little bit more context. Hopefully we can have deeper analysis in the coming days. For what it’s worth, both Metro and the Minicipal League seem to be acting in uniquely good faith. The Minicipal League is not anti-transit, and they supported the light rail expansion that passed just a few weeks ago.

Erica Barnett wants to get rid of the ride-free area because it “makes fare collection a nightmare”. The ride free area is there because boarding in downtown would take a really long time if everyone getting on had to pay right then. Right now everyone can just walk on and off and the buses can get through downtown in a reasonable amount of time.

So here’s my question: is fare collection really a nightmare due to the ride-free zone? Would you want to trade a more complex fare collection process for buses getting gummed up downtown with fare payments? Photo from novon on flickr
In a my continuing series on how expensive roads are, I offer this P-I article that points out the rising costs for the 520 bridge. So-called “option K” has a price tag of $6.6 billion, and the cheapest option is $4.5 billion. For a constrast, all the light rail in the Prop. 1 package passed this month had a price tag of about $7 billion. The new roof going in a King Street station. The green tiles are the new ones

Yes, the blog was hijacked over the weekend by spammers, thanks to those of you who wrote in to let us know about it. Sorry for the inconvenience, I think I’ve solved the problem.

Yesterday in his weekly address, President-Elect Obama announced that his transition team is working on a two-year, nationwide plan to create jobs rebuilding the country’s infrastructure. The President-Elect specifically mentioned improving roads, bridges, schools, and investing in clean-energy.

A member of the Obama-Biden Transition Energy and Environment Policy Team posted a followup video specifically mentioning the need to invest in mass transit as part of this plan (around 1:50 in the video).

We all have an amazing opportunity to have a part in ensuring the success of this plan, and seeing real change throughout the country in the near future. Here on STB, we’ve started talked about what’s next, and we’ll continue to post about how everyone can get involved. It sounds like we will soon have an ally in the White House, and I am hopeful that 2009 will turn out to be a very interesting year.

You can share your ideas at obamaurbanpolicy.org. Be sure to also let us know in the comments what you propose.

Why doesn’t seattle have an agency like the Portland Development Commission?

So what do you think? Can I get it’s about time in the house!

One Bus Away is starting to get attention. Seattle Magazine gave it a great review. Hopefully Metro is taking notice.

ps sorry for the horrible picture. I’ll get a better one soon.

This is an intersting article about NIMBYism in SE Seattle