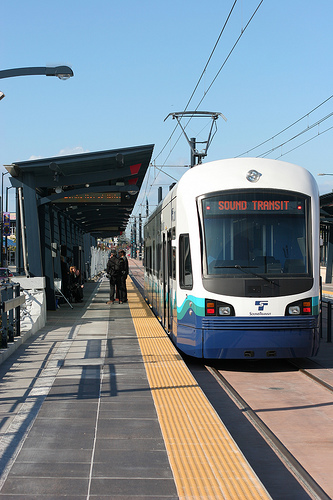 Sound Transit is considering distance-based fares for the Link light rail system that is expected to begin service this summer. Under this plan, users would pay a base fare to ride the system, with an additional fee per mile on the train. Proposed fares are:

Riders with the upcoming Orca smart card would tap the card to a reader both when entering and leaving a train. Those without cards could purchase tickets at the station, with ticket vending machine that will apparently lets the rider choose his destination. Security on board the train could verify your ticket/Orca purchase, and citations and fines would be given to those who boarded the train without paying. There would be no turnstiles and most riders would be operating under the honor system.

According to an ST press release, the maximum fare would be either $2.50 or $2.75 for the entire route between Westlake Center in Downtown Seattle to Seatac Airport. (Due to planned bus fare increases, Metro route 194 — the airport bus — will cost $2.75 during peak hours by January 2010.)

ST has scheduled three public comment meetings and the board will formally consider this plan in the coming months.

From my own perspective, I think charging based on distance is smart. While unfeasible for most bus lines in the county, it makes sense for light rail. It subtly incentivizes people to think locally and manage their trips their better, and it makes sense that people who take the train shorter distances don’t share the same burden as those who ride it the full length. This sort of pricing scheme will ultimately reflect relatively small cost differences on the current line, but one can easily see that as light rail expands to Lynnwood, Federal Way, and Redmond that cross-county, long-distance commuters will end up paying higher fares than in-city commuters. In my world, that’s how it should be — not to punish those who live far from urban areas, but to price transit like the commodity that it is.

What do you think? Do distance-based fares make sense; should ST stick to a single, unified fare; or should there be another type of fare system? Let us know in the comments!