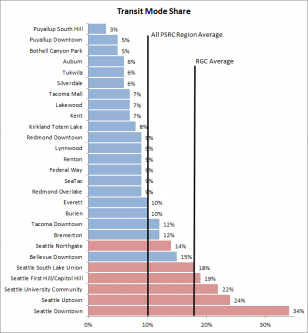 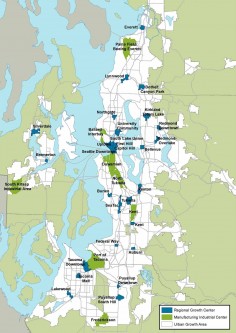 So how are the regional growth centers doing? Are they effective hubs for regional transportation?

PSRC data reveals that 76% of commuters in the region drive to work alone. (The PSRC region comprises the four counties of King, Kitsap, Pierce, and Snohomish). The RGCs do better with only 61% driving alone. Transit mode shares show 18% ride transit in the RGCs vs. 10% for the PSRC region.

So far, so good. But the average numbers are skewed by Seattle. The six RGCs within the city of Seattle (red bars on the chart) all have transit mode shares higher than the region. All but Northgate are at or above the RGC average. Most other centers are far behind.

In the chart above, ranked from worst to best, we see only 3 of the other 21 RGCs have transit mode shares higher than the region as a whole. Those are Bellevue downtown, Tacoma downtown, and Bremerton. Conversely, just 4 have SOV shares below the average of the entire region, and none by very much.* The region, of course, includes thousands of square miles of sprawling suburbs and rural areas. It’s striking that most RGCs fail to clear such a low bar. 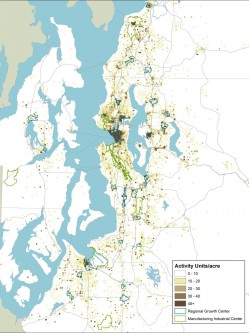 The map to the left shows activity units per acre. Activity units, a favored PSRC measure, are the sum of the number of residents plus the number of jobs. Regional growth centers (outlined in blue) capture a fair, but not overwhelming, proportion of activity in the suburbs. But as Matthew Johnson noted last week, they exclude a wide expanse of Seattle that is relatively dense.

Does it make sense to concentrate transit investments in centers that aren’t performing even to the low average of the region?

For transit, land use is destiny. Most RGCs aren’t very urban. Can they evolve, and can early transit investments aid in that evolution? That’s the hope of planners in many cities who see Link light rail as key to future urban development.

Redmond Overlake may be a notable outlier. It’s a mostly non-residential area with good transit access, but 80% SOV usage by residents (i.e. four points above the regional average). Yet, the development prospects are strong with an expected 30-40 thousand future residents. Why do Overlake’s prospects seem better than its peers on this list? Overlake will have a Link station in 2023, but it also benefits from strong local employers and proximity to successful downtowns in Bellevue and Redmond.