The communities on the North end of Lake Washington have been in an unfortunate no-man’s land when it comes to regional transit discussions. Straddling Sound Transit’s North and East King subareas, and used by plenty of Snohomish County residents, SR 522 has often played second (or third) fiddle to the I-5 and I-405 corridors.

The cities and neighborhoods along SR 522 – from Lake City to Kenmore to Bothell – realized somewhat late in the game that getting organized is the key to getting on Sound Transit’s radar. But organize they did and ST has responded with a proposal (pp. 70-83) for connecting SR 522 to Link via NE 145th St as part of ST3.

The plan comes in two parts. Part one is a BRT project along SR 522 that fills in the gaps in existing HOV lanes along the corridor. For $311M, ST would acquire property and conduct the capital projects necessary to keep buses on SR 522 running smoothly from the Seattle city line to Bothell, with a possible extension to I-405 BRT. A separate project would then connect those buses to the Link station at 145th.

The 522 segment is straightforward. As we know, any gap in bus lanes can screw up reliability for the whole route, so closing the gaps helps make transit a more viable option for commuters. To entice these folks out of their cars, ST could also build three 300-space parking garages along the route, in Kenmore, Lake Forest Park, and Bothell. That’s kind of a shame, since all three of these towns have plenty of nice lakefront transit-oriented development (TOD) potential along the route. Bothell is already transforming its downtown along these lines.  Hopefully the towns along the route choose TOD over parking near the stations.

Along 145th, Sound Transit presents two options. A $75M, lower capital alternative would provide queue jumps and occasional bus lanes, while a $135M higher capital version would provide BAT lanes for the route and stations at 15th, 20th, and 25th Aves NE. Both assume that the 145th St Link station has BRT access (hurrah!). Ridership is 3-4000 riders for the first version and 3500-4500 for the second. While ST would be responsible for the construction, maintenance would be left to the municipalities themselves. 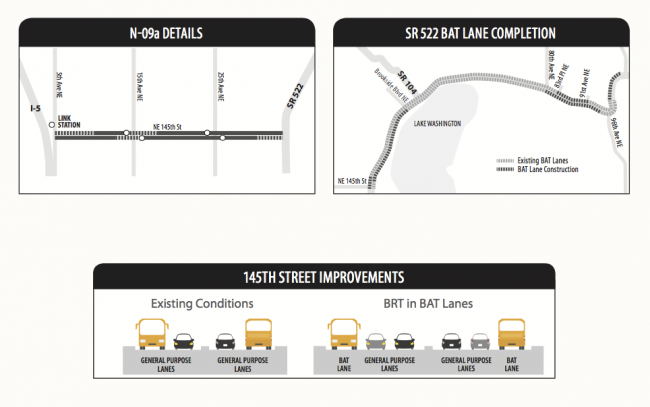 As I noted in my last piece on 145th St, the right-of-way is very constrained. There are currently 4 lanes of traffic and very narrow sidewalks. Thus, the higher-capital version assumes significant property acquisition along the route. Additionally, ST would not build BRT enhancements West of the Link station, leaving that to a consortium of agencies led by the City of Shoreline.

For residents of Seattle’s Lake City neighborhood, however, the picture is more mixed. While some would benefit from 522 enhancements, 145th is a bit too far north for the core of the neighborhood. They’d benefit more from a Link station at 130th St, which is also under consideration but seems far less assured.

For SR 522 riders north of the Seattle city line, the 522 project + the high-capital 145th St project, $446M combined, would provide reliable access to Link from the North end of Lake Washington while at the same time speeding up all Metro and ST buses on 522.  Ridership is estimated at 3-4000 for this portion of the route.

All in all, these are worthy bus capital projects that will improve both East-West and North-South mobility while feeding riders to Link and I-405 BRT.  Evaluated in terms of cost per rider, the high-capital alternative looks quite attractive, cheaper than I-405 BRT or any of the light rail “spine” projects.  522 BRT also gives several North Shore communities another reason to vote for ST3.

As the region grows, land on either side of 145th and 522 is only going to get more expensive, so the sooner it’s acquired for transit use, the better.  Getting the funds, however, may come down to accounting, not ridership. Considered as a North King project, SR522 is less attractive than Ballard-West Seattle. As an East King project, it’s more viable. In a small way, this project shows just how hard it is to adhere to strict subarea equity when building a truly regional network.