Last week I described the overall goals for the RapidRide program. Today I’ll look at all the corridors themselves.  Keep in mind that everything described here comes from the Transit Master Plan addendum and represents early-stage ideas.  This will all be refined through community input as these routes are designed and implemented over the next seven years.  Overall, though, the 2015 addendum includes more aggressive use of exclusive lanes than the original 2011 TMP.  There is also mention of center-running bus lanes on every route, raising the possibility of buses with left-hand doors.  It’s quite possible that within 10 years the majority RapidRide routes could require left-door buses.

First, though, a brief taxonomy of bus lanes, for those who might need a refresher.

In general, more exclusive the lane, the faster the bus can go.  Now, on to the corridors…

Madison Street, which we’ve covered previously, is the farthest along in design.  At just under 3 miles, Corridor 1 is small but mighty.   It’s expensive, at $41M/mi, but quite productive, projecting 172 riders per platform hour  (The next closest is corridor 3 at 107 riders/hour).   That gives it a low operating cost of $1.24 per new ride.  The TMP shows it extending to MLK, although we know the Eastern terminus is very much up for debate.   Despite having 36% mixed traffic, it achieves 40% reduction in travel time, the highest of any corridor.  SDOT estimates 17,000 daily riders in 2035. 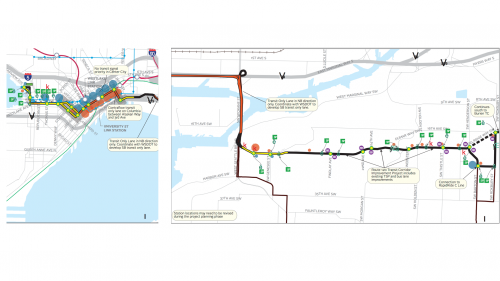 Corridor 2 mirrors Metro Route 120.  It’s over 10 miles long, and would have dedicated lanes for 30% of the route.  This is a great example of why 100% exclusive lanes is sometimes overkill.  Could you do it? Sure. Would it substantially improve travel time? Unclear.  The exclusive lanes are in the most important places: from the West Seattle bridge approach to the terminus in SLU.  The cost is $4.6m/mi., and it achieves a 14% reduction in travel time, probably because the 120 is already traveling close to the speed limit for most of its route. 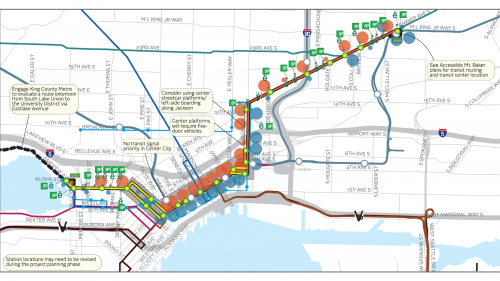 This corridor is served primarily by the 7, though other buses like the 9, 14, and 36 share parts of the route. Jackson and Rainier are often congested here, so it’s good news that, for just $4.4m/mi., SDOT is proposing transit-only lanes for the entire corridor.  The TMP also includes this nugget: “evaluate tradeoffs of converting First Hill Streetcar running way on Jackson Street to center-running transit-only lanes to allow for shared RapidRide/streetcar operations and Japantown, Chinatown, and Little Saigon center-platform stations.”  The result would be an impressive 33% travel time savings through the corridor. 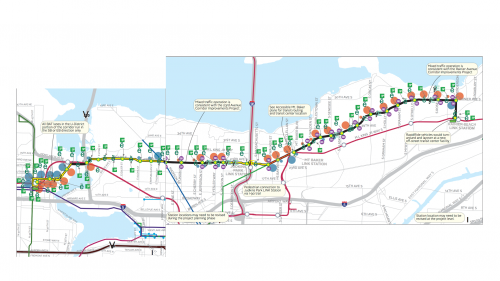 This route is a hybrid of Route 48S and Route 7.  Building on the 48’s success as a connector (the new TMP has a full page that can only be described as a paean to the 48), Corridor 4 connects with no fewer than five Link stations (once East Link is built).  Riders will have access to the entire link system without having to transfer downtown.  Which is good, because unlike the 7, this route wouldn’t even go downtown.   Downtown riders could instead transfer to link at Mount Baker or Judkins Park.

The total number of stops would be reduced, and BAT lanes would speed up travel through Judkins Park, Montlake, and UW.  Much-needed (and welcome!) road diets on 23rd and Rainier will make transit lanes unworkable, so buses will run with traffic in the Rainier Valley and CD, though they will have bus bulbs and signal priority to stay speedy.  For $8.8m/mi, we’ll see a 24% travel time savings. 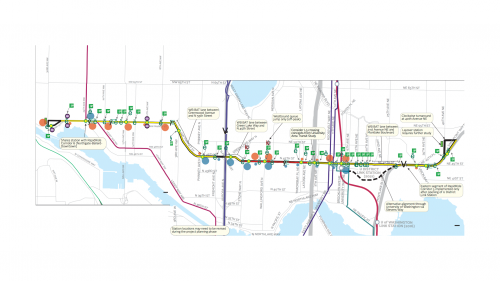 Ballard-UW is a hard nut to crack without springing for grade-separated subway (which is still officially on the table for Sound Transit!).  Still, SDOT is making headway in speeding up the 44 since the last TMP.  There was some stop consolidation along with speed and reliability improvements back in 2012.  With the new TMP they’re back to finish the job.  Acknowledging that traffic isn’t going to get any better, SDOT is proposing BAT lanes or better for almost the entire corridor.  71% of the route would have dedicated right-of-way.

These improvements won’t come easy. the TMP acknowledges that this much dedicated ROW is aspirational, noting that they will have to “evaluate feasibility” of dedicated lanes east of I-5, and “work with corridor business stakeholders to evaluate tradeoffs between transit speed and reliability and on-street parking needs.”  Transit supporters will have to be particularly organized here for the 19% travel time savings to materialize. 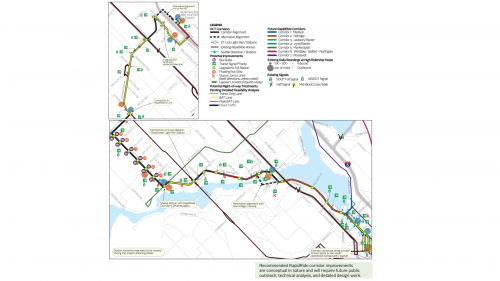 Corridor 6 was one of the “rapid streetcar corridors” in the 2012 TMP. Now that the TMP assumes Link from downtown to West Seattle, it becomes a bus corridor.  It would have 41% dedicated ROW.  In Ballard, the corridor moves from 15th Ave NW to 24th, with bus bulbs.  There would be transit-only lanes on Leary and Westlake (though the TMP notes that Westlake will get crowded with Corridor 2, RR-C, and the Streetcar all using it).  BAT lanes would run through Crown Hill on Holman Road and around North Seattle College, where the route would cross I-5 at NE 92nd to avoid Northgate way and end at the Northgate Transit Center.  A total travel time savings of 17%.  At 24,400 riders in 2035 it would be the busiest of the seven lines mentioned here. 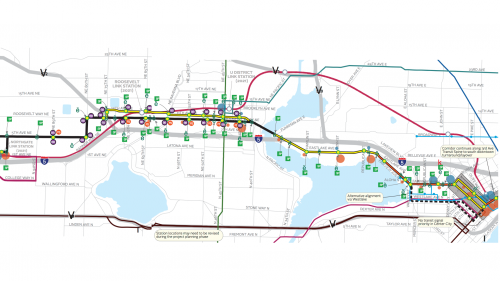 Roosevelt is in the outreach phase already so, again, I won’t spend much time with it here. What SDOT has at its open houses are going to be more current than what’s in the TMP.  As we’ve noted, the preference is for BAT lanes in Eastlake through to Roosevelt, with a dedicated lane on Fairview Ave through South Lake Union.  What was once proposed as a rapid streetcar is now a bus running largely in its own right-of-way (49%).  23% travel time savings.

Also worth mentioning, the TMP gives some love to RapidRide C specifically.  It proposes some traffic improvements to keep cars out of the bus lanes and possibly a new C Express: 10 peak trips that would stop only at the ferry, Morgan Junction, Alaska Junction and Downtown.

Update 1:03pm: Added keys to the colors above.

129 Replies to “RapidRide+: The Corridors”