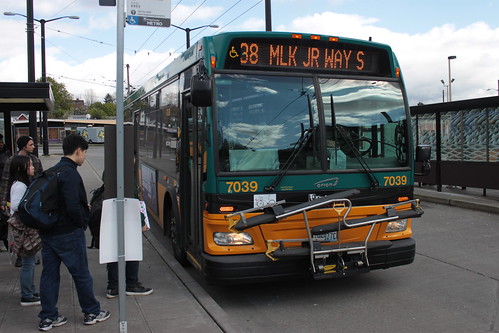 For all the talk of unmet demand on MLK, the proposal has no additional service there. Indeed, by introducing reliability problems with no additional frequency, intra-MLK trips will likely get worse. Starting trips in the International District will scramble arrival times and degrade the transfer from Link to buses on MLK.

The councilmembers understand the advantages of replacing two routes (106 and 124) between eastern Georgetown and downtown with one (124) running twice as often, which is more likely to maintain proper spacing between buses. One alternative for the ID/Mt. Baker service hours would apply the same lesson to high-ridership route 7, potentially matching the peak frequency of Link.

Another alternative would actually improve service for the aforementioned communities on MLK Way by boosting its frequency beyond 15 minutes. This would also improve an already high-quality transfer at Mt. Baker Station. Either alternative is superior to running duplicate service which does nothing but avoid high-quality transfers between 7, 38, and Link. The Metro proposal effectively resurrects the 42, historically a poor performer.

Though we have many process objections to how this proposal was developed, our primary concern is always the end result. And to be clear, we like most of what is in the restructure proposal. It addresses many needs specifically identified in the 2015 Service Guidelines Report. One of them — a frequency investment in route 124 — is listed on page 12. However, a duplicative, poorly synchronized route between Mt. Baker Station and the International District is nowhere to be found in that report.

Reliability is a social justice issue. A mere annoyance for a salaried professional is a job-threatening event for many low-income people. We oppose the 106 extension to the International District not because we prioritize wonky ideals of network elegance, but because we believe that frequency is freedom and reliability is liberation. The same riders this extension is intended to serve would reap a much more usable network if the proposed hours were reinvested in the MLK-Renton corridor and we worked harder to solve the transfer issues that make community groups appeal for the reinstatement of redundant service.

Executive Constantine’s push for agency integration faces its greatest tests in micro issues like these. For lack of an integrated policy solution for transfer fare media, we are set to spend millions in public funds on redundant service. We will also be pushing riders away from Link – far and away the region’s premier and most reliable transit – as a matter of policy. Is this the message we want to send?

We would like to thank Councilmembers Rod Dembowski and Kathy Lambert for pointing out how the 106 ID extension proposal goes in the opposite direction from what Metro was trying to do with the U-Link restructure. We encourage councilmembers who sense that this is the wrong thing to do to pass the rest of the restructure, and instruct Metro to revisit the use of the service hours that are being applied to the ID extension.

The restructure ordinance will be heard at full council on May 16. Please contact your County Councilmembers and ask them to pass the restructure without the duplication between Downtown and Mt Baker. In particular, we suggest contacting TrEE Committee Chair Rod Dembowski, Vice Chair Claudia Balducci, District 2 Representative Larry Gossett, and District 8 Representative Joe McDermott.