After studies, drafts, public comment, more drafts, amendments, and so on, you might be a little confused about what exactly is in Sound Transit 3 (ST3). This is the third of a brief ST3 reference series (2019-2024 here, 2030-2036 here) about what’s in the package that we’ll vote on in November. Today, the two last projects in the delivery schedule, plus various mostly-small projects with indeterminate delivery time.

In 2039, ST delivers the Tacoma Link extension. The $478m project would extend the terminus westward by 3.5 miles to Tacoma Community College, at-grade except for an elevated crossing of SR16.  Unlike every other rail project in ST3, some stretches of this would mix with traffic, like elsewhere on the line. There would be six new stations, at TCC, Stevens, Union, Sprague, Pearl, and Hilltop. To support 6-minute peak headways, the project will double-track 0.9 miles of the existing line between Union Station and the Tacoma Dome. 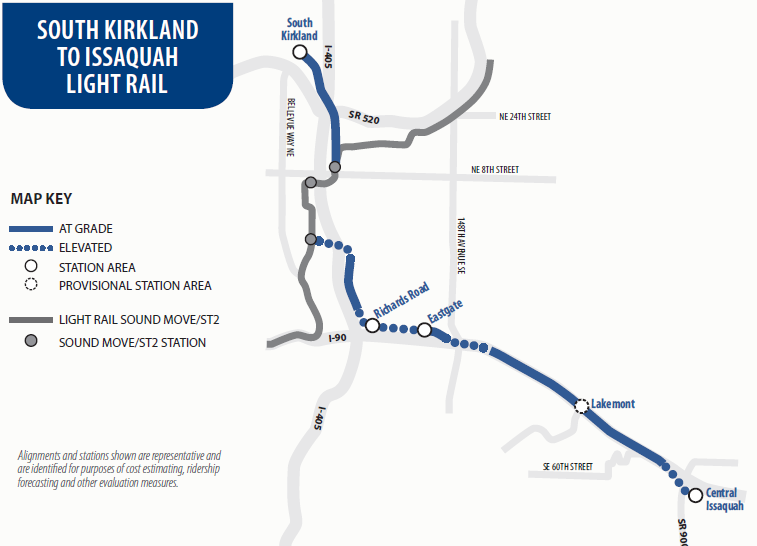 At the 25-year mark, 2041 sees the last element of the Sound Transit 3 program: Link from South Kirkland to Issaquah. The $1.9 billion, 11.75 mile, at-grade and elevated line would use three stations from East Link, and build four more. Central Issaquah (500 space garage) and Richards Rd/Factoria would be elevated, while Eastgate (230 net new spaces) and South Kirkland would be at grade. There is also an unfunded, elevated station at Lakemont. While the 23-minute end-to-end travel time is competitive with driving, the line is project to attract only 12,000-15,000 daily riders in 2040. This is a testament of the pitfalls of focusing on travel time and cheap implementation rather than serving high-demand areas well.

Issaquah concludes the package at the 25-year mark. However, throughout those 25 years there are other projects where there is no ribbon-cutting, or ST cannot release a completion date at this time.

Most significantly, South Sounder improvements will support 10-car platforms and add additional round trips above the 12 (9 peak, 3 contra-peak) funded through ST1 and ST2. Unfortunately, details about additional trips are pending negotiation with BNSF. The total project is budgeted for $934m.

Finally, there are a bunch of items of less practical interest to future riders:

That wraps up the project list, which touches every corner of the Sound Transit District. Next time: how much all of this is really going to cost.