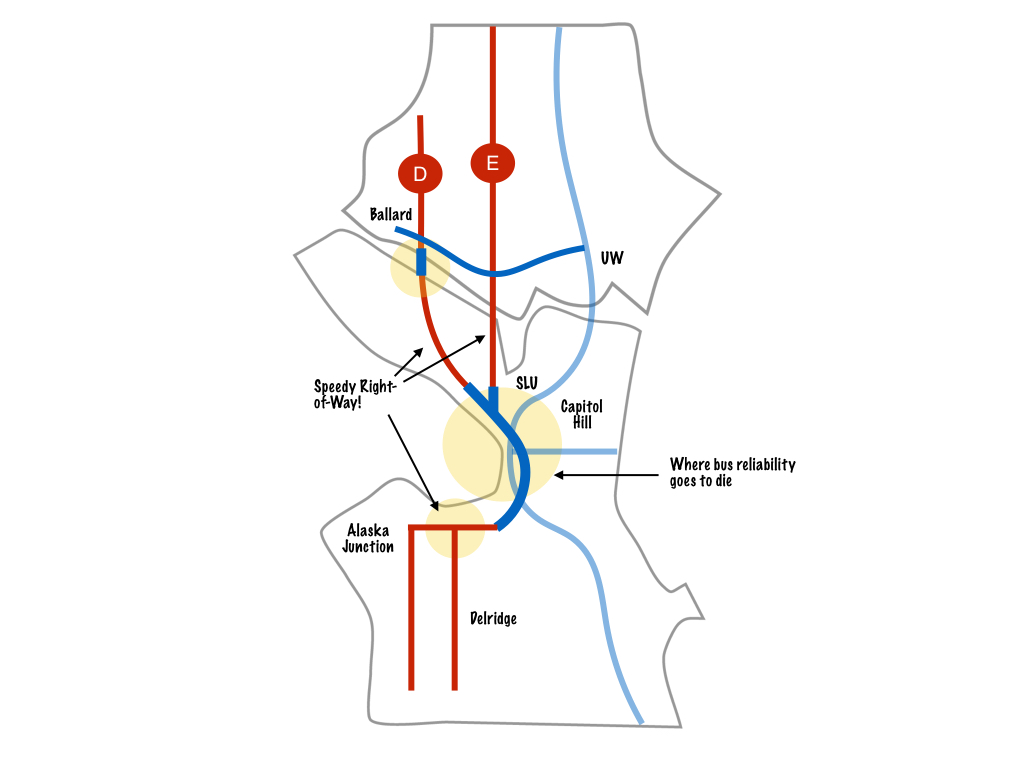 Although it hasn’t gained any support at all among regional decisionmakers, a longtime favorite in the STB commentariat has been the “peanut butter” plan. It would build rail and bus tunnels where surface buses are hopeless, namely the Ballard/UW corridor and in downtown Seattle, and try to address the worst bus bottlenecks on Elliott Avenue and West Seattle, where Sound Transit 3 will build light rail. It’s a great plan for which I wouldn’t hesitate to vote.

This plan would undoubtedly serve more areas of Seattle than the existing ST3 proposal, although it would do so with buses somewhat less reliable than light rail. Whether that tradeoff is worth it is comprehensively addressed in dueling articles by Ross Bleakney and me, and readers can read those and draw their own conclusions.

Though the ST3 decision process is over, peanut-butter advocates might comfort themselves with the idea that ST3 failure might result in a smaller retry, where a cheaper BRT-heavy option is the only alternative. Unfortunately, the latest cost estimates suggest that the peanut-butter plan is actually more expensive than the existing ST3 plan, unless Sound Transit strips out the features that give it the advantage of geographic breadth.

Throughout this article, I will use high-end cost estimates, as is my custom, and 2014 dollars because all corridor studies use them.

The ST3 package will spend a total of $5.833 billion to get from Ballard to West Seattle, of which $1.752 billion is the tunnel from International District/Chinatown to Denny St. Some fraction of the $2.550 billion to finish the line to Ballard will complete the tunnel from Denny to Lower Queen Anne, but ST doesn’t have a readily available figure for the portal-to-portal costs combined from the two segments. There is also $65m for Rapid Ride and Madison BRT that the peanut butter plan might arguably address, so make the total $5.9 billion.

As the name implies, the peanut butter plan is a series of somewhat smaller projects. The easiest to estimate is a Ballard/UW tunnel, which would cost $1.9 billion for a 3-station line. Seattle Subway, among the strongest advocates for this line, believe with many Sound Transit critics that there should be at least two additional underground stations. We know from the separate 99/Harrison Station study option that an underground station costs in the area of $367-393m. So if you would like a proper Ballard/UW line, we’ll charitably charge that as a further $400m, for a total cost of $2.3 billion.

The new bus tunnel downtown is much harder to price. To simply replicate the 3.4 mile Sound Transit 3 tunnel (a “D Line tunnel”) is probably roughly the same cost as the rail version. I estimate that the tunnel from Chinatown to the Lower Queen Anne as about $3 billion.* The original, 3.5-mile branched concept has better service for Belltown and Aurora buses, and worse to South Lake Union. It also has the same number of total stations, so I’ll once again be charitable and assign it the same cost.**

At this point, our high-quality Ballard/UW + bus tunnel concept is $500m short of the actual ST3 proposal. And we haven’t even gotten to West Seattle, aside from benefits from the bus tunnel. Frank’s post comes up with a total of $1.9 billion to do a good job in the Delridge and West Seattle Junction corridors. Interestingly, that’s more than the total cost of finishing the same light rail segment, though with more geographic scope.

So the pure peanut-butter plan, using our new estimates, is about $7.2 billion. This is $1.4 billion over the actual Ballard/West Seattle project cost, and about $1.2 billion over the total subarea budget (not counting SR522 BRT). Given that the existing strain on the subarea budget required a 25-year timeline, the question becomes what to cut. There are lots of choices: the infill stations at 130th and Graham St, the two extra stations between Ballard/UW (an irreversible decision!), applying standard “BRT creep” methods to service for West Seattle, or likely some combination of the above.

And now that the ST3 decision is made, the budget vise is even tighter. Given likely interpretations of a no vote, a future measure is unlikely to exceed $54 billion in Year of Expenditure (YOE) dollars, while the cost of all projects will go up.

The peanut butter plan emphasizes different things than the ST3 package, and it’s logically coherent to prefer one to the other regardless of the relative cost. Without fiscal constraints, one might reasonably believe it to be a superior package. As it consists of a series of smaller projects, it’s easier to cut bits and pieces without blowing everything up. On the other hand, cutting those pieces either reduces the key attraction of the plan — geographic scope — or erodes quality with “BRT creep”, which is the reason many people distrust bus projects in the first place.

Personally, I think the Seattle projects in ST3 are great, and will vote for them enthusiastically. People who think the ST3 projects are actually counterproductive should absolutely vote against the plan, as large projects will crowd out some smaller ones that might make a more positive difference. But anyone who thinks ST3 is pretty good, while inferior to some other grand scheme, should vote yes, because we simply can’t get to other grand schemes from here.

*As I said, Sound Transit doesn’t have a readily available portal-to-portal estimate for the tunnel’s cost, as the Denny-to-LQA tunnel is buried in the Ballard-to-Denny cost. Generating our own estimate is fraught: simply prorating the overall length yields $3.2 billion; prorating the number of stations, $2.6 billion. Alternatively, if the trend holds that the tunnel costs three times more per mile than the rest of the Ballard segment, the algebra works out to $1.2 billion for Denny-LQA and $3 billion total. Given all this noise, I settled on $3 billion.

**For the branched tunnel, there is the same number of stations, but it is 1/10 mile longer. The doomed Battery St. tunnel (0.3 mi) would need substantial work but could save a bit. Branching will add cost and complexity. And for any rail-convertible bus tunnel, there are presumably additional costs to support buses. Your mileage may vary.

107 Replies to “Whatever Its Merits, “Peanut Butter” Doesn’t Save Any Money”