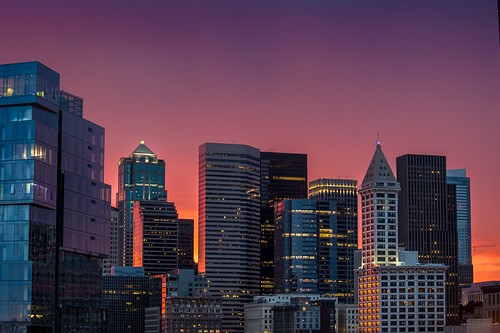 Crises inspire clarity and focus, and One Center City is no different. Our whirlwind of overlapping projects usually overwhelms us with extended process and mind-numbing rounds of design revisions and open houses. But Seattle in 2017 faces an historic convergence of projects that prevents us from such discursive luxuries. If we do nothing, we face 3 years of misery from 2018-2021 until Northgate Link saves the day. We have to act quickly and boldly.

In a Center City where 70% of commuters (and 95% of new commuters) do not drive alone, it should be crystal clear where our priorities lie. From Vision Zero, our Bike and Transit master plans, to our climate commitments, or to a cold utilitarian optimization of space, One Center City should head in only one direction. We must enhance transit, walking, and bicycling, and deemphasize peak auto access. Since the geographic constraints of our city are immutable, our dilemma is not ideological but geometric. As such, there are only two ways to make traffic better: transcend it through a more efficient use of space, or hope for recession, depopulation, and urban flight. Which would you prefer?

If our civic leaders really believe this, One Center City’s options come into clear relief. Here is what should be done:

Today there are only a handful of all-day bus lanes, such as Battery Street or Aurora Avenue North. The core arterials of our Center City, 1st through 5th avenues, are unrestricted to cars for all but 35 hours per week. It’s time to install all-day transit exclusivity on 3rd Avenue, and all-day bus lanes on whatever additional arterials we designate for transit. One or two people should not be able to hold up 50 on a bus.

Transit priority will only work with robust enforcement and clear rules. Creating all-day transit restrictions will be clearer for drivers too, who will not get caught innocently blocking transit on account of ignorance. For those who still cheat, there should be dedicated enforcement resources, even if SDOT has to pay SPD for them. Cameras would be ideal, but a larger police presence would help.

Pick All the Low-Hanging Fruit

Drop the $5 ORCA card fee. Deploy far more off-board payment throughout Center City. Integrate the Monorail with ORCA. Re-time signals at the speed of transit. Paint more transit lanes, and enforce them. Concrete is expensive, paint and policies are not.

An all day, two way, transit only spine on 5th Avenue– Option D – offers the best opportunity for accommodating increased surface transit during the crunch years of 2018-2021. It costs little more than the ‘do nothing’ option, but instead of spending money for no benefit through increased operating costs, we have an opportunity to create an entirely new transit corridor with the same money.

5th Avenue is perhaps our most beautiful downtown street, and 3rd is perhaps the least. In converting 5th to a transit corridor, care must be taken to preserve and enhance the pedestrian realm. We must make 3rd look more like 5th, and not the other way around. This could be accomplished by making 5th Avenue just one lane in each direction (instead of the proposed 2 lanes southbound and 1 lane northbound), creating space to expand sidewalks and bus shelters without needing to cut into the urban tree canopy. Public realm partnerships with civic associations such as the Downtown Seattle Association (DSA) should be welcomed and expanded.

Don’t Throw Bikes (Literally) Under the Bus: Option B for Pike-Pine

This 3-year crunch should not delay prior promises made to the bicycling community through the Bicycle Master Plan, Vision Zero, and Move Seattle. We believe that the Basic Bike Network concept, as laid out by Cascade Bicycle Club and others, can readily be accommodated while providing sufficient transit capacity.

From 8th Avenue to Broadway, Option B for Pike-Pine would create a 2-way cycle track on Pike Street and move all transit traffic to Pine Street. We believe this is superior to the confusing, anti-urban one-way couplet proposed in Option C. We believe Option B protects the integrity of Capitol Hill’s street grid, offers the best opportunity for traffic calming, and provides the most legible transit network by consolidating buses onto (traffic-free) Pine Street.

Run the Longest Trains Possible, as Often as Possible

We have only one grade-separated right of way through Center City, the Downtown Seattle Transit Tunnel (DSTT). Surfacing the tunnel’s remaining buses for a semi-private construction project is unfortunate for a period in which maximizing the tunnel’s capacity is imperative. Though the best response would be to delay Convention Center construction until new light rail vehicles arrive, we must maximize DSTT capacity either way.

If we do surface remaining tunnel buses in 2018, Sound Transit should commit to running the longest train consists possible at the highest possible frequency. Knowing that 122 new light rail vehicles will begin arriving late next year, Sound Transit should temporarily lower its reserve ratio to deploy as many cars as possible, and additional trains between UW and Stadium Stations should be implemented to boost core capacity.

We remain concerned about the transfer environment at UW Station, and we implore the university, SDOT, WSDOT, Metro, and Sound Transit to allow bus stops adjacent to UW Station on the east side of Montlake Boulevard for inbound buses from SR 520 that terminate at UW Station. For outbound buses, we ask the university to allow an operating easement in the E-19 parking lot. Doing so would significantly cut down the time needed to make the transfer.

We believe that singling out Route 550 for truncation will be confusing and frustrating for riders. With adequate transit priority and enforcement, we believe that all I-90 service can and should be accommodated together to create a common corridor. We do not believe that the transfer environment at International District Station is sufficient to handle peak loads, and we believe that future Link corridors should do as much as possible to retain and grow their ridership in advance of Link’s arrival.

The proposal for Route 41 on Pike and Union Streets fails to connect riders to the DSTT, missing two stations by one block each. Even if the Pike-Union couplet is implemented, we ask planners to consider running Route 41 through downtown on 3rd Avenue. We believe the maximum of 12 additional buses per peak hour/peak direction is not too much for 3rd to bear, especially with the proposed removal of 11 West Seattle routes from 3rd.

Go Through with the West Seattle Restructure

We believe in the merits of the proposed West Seattle restructure for a number of reasons:

To increase reliability from West Seattle to Pioneer Square, we ask that this restructure come with additional bus lanes and street parking removal wherever possible.

We all look forward to the fast, reliable transit Northgate, Lynnwood, and East Link will provide. But though there will be pain during the transition period, we believe we do not need to hit pause on all of our shared values.  Let’s build a city where our streets reflect the proportions of people choosing not to drive, and make transit, walking, and bicycling the clear choices for Center City commuters, shoppers, and revelers alike.

67 Replies to “Editorial: Go Big on One Center City”