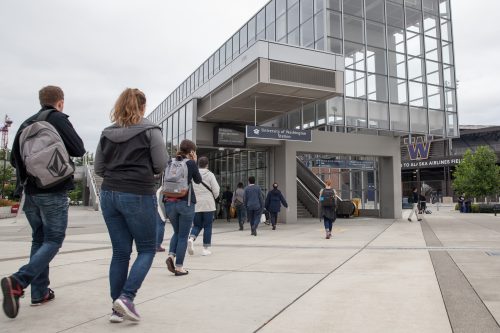 Eastside bus riders, feeling the slow-down from traffic congestion, have already begun taking advantage of the quick ride the Link Light Rail offers, transferring to the train at the University Washington Station to head downtown.

“It’s just six minutes from UW to Westlake on the train,” said Ted Day, a transit planner for King County Metro, during an open house presentation on June 19 near the UW Station. “That’s incredible. There’s no other way you can do that, except in the air, and I don’t know many people who own helicopters.”

“People are already adapting, getting on the Link at the UW Station to come downtown,” he added.

King County Metro and Sound Transit, preparing for increased congestion on Seattle’s streets on top of the closure of the Downtown Transit Tunnel to buses, are planning a major restructuring of Eastside bus routes for 2018.

This is the first restructuring of Eastside buses to facilitate better connections to light rail, the transit agencies plan to funnel downtown-bound Eastside bus riders to the UW Station. The restructuring would then free up buses that would have been entangled in downtown traffic, allowing the agencies to expand services to new areas and increase the frequency of buses throughout the day.

The June 19 meeting was sparsely attended with most participants wandering in after seeing signs posted for the event. For many attendees of the open house, either alternative option would improve their commute due to the expanded services to SLU and north of the University. The main difference between the two plans is with option b buses would be more frequent while option c allows for better connections for new service areas.

Participants were asked to rank the options, the most popular was option b, focusing on increasing frequency of buses. Riders acknowledged that transferring to link when heading downtown will eventually be faster than traveling by bus.

Jonathan Dubman, a transit rider who has advocated for better bus-rail connections at the UW Station, wants to see the transfer experience improved.

“The road configuration forces you to cross two busy streets to go from Link to an Eastside-bound bus,” Dubman said. “When you do that in the rain in November, it’s going to be a drag. It’s a longer walk than it needs to be.”

Dubman said it was a fixable problem but requires an investment of funds.

The third phase of outreach will begin in the fall with a preferred option being presented for additional public comment. The earliest implementation for the bus restructuring plan is expected for September 2018. A survey is available until June 30 to provide input on the three options.

“We feel there’s an appetite to connect up to light rail,” Day said. “We just haven’t given riders really great options to connect to the train.”

The key to making the bus-train transfer a viable option for riders is matching train and bus arrivals, so riders forced to transfer don’t have to wait long, Day added. 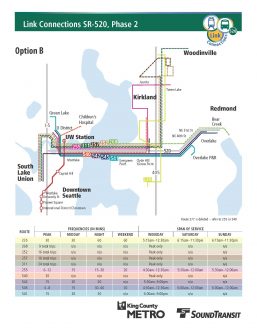 Not rerouting buses — taking no action — is expected to impact the reliability of buses.

The “frequency focus” plan, option b, redirects all Eastside buses to the link station near UW allowing the transit agencies to focus the most resources on other routes; expanding services to new areas and increasing the frequency of buses. The last option, the ”connections focus” plan, redirects some Eastside buses to the UW Station, allowing for a smaller expansion of new routes and a slight increase in the overall frequency of buses. With “frequency focus”, riders would have more choices along with more frequent service compared to “connections focus” option, according to Day.

In an effort to encourage passengers to transfer to light rail, the “frequency focus,” also known as option b reroutes Metro buses 252, 255, 257, 268, and 311 and ST 545 through the University of Washington after exiting State Road 520, instead of heading south on I-5 to downtown. Metro 252, 257, 311 and ST 542 would provide new services to South Lake Union. ST 540 would serve Seattle Children’s Hospital and ST 541 would connect the University with the Green Lake Park and Ride. This option suspends Metro 277 and adds roughly 150 new trips each weekday, increasing bus frequency throughout the day and later into the night. 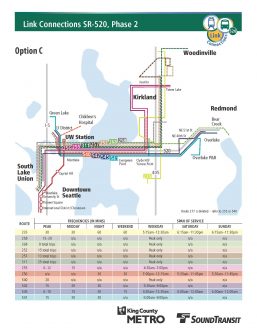 Option three, the “connections focus” option, would reroute Metro 255 (weekday daytime only) and 268 and ST 545 through the University instead of downtown. Metro 258 and ST 542 would provide new services to South Lake Union. ST 540 would take riders to  Seattle Children’s Hospital and ST 541 would connect Green Lake Park and Ride with the University. With this option, Metro 252, 257, and 311 would continue service to the north end of downtown Seattle. A new route, Metro 256, would provide direct service between Totem Lake, Kirkland, and downtown Seattle on nights and weekends. This option also suspends Metro 277 and adds roughly 130 new trips each weekday.

Both options, b and c, create new connections between Seattle and South Kirkland, and replace Metro 255 north of Totem Lake Transit Center with a revised Metro 235. 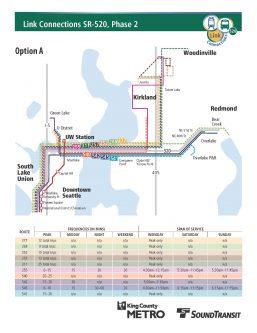