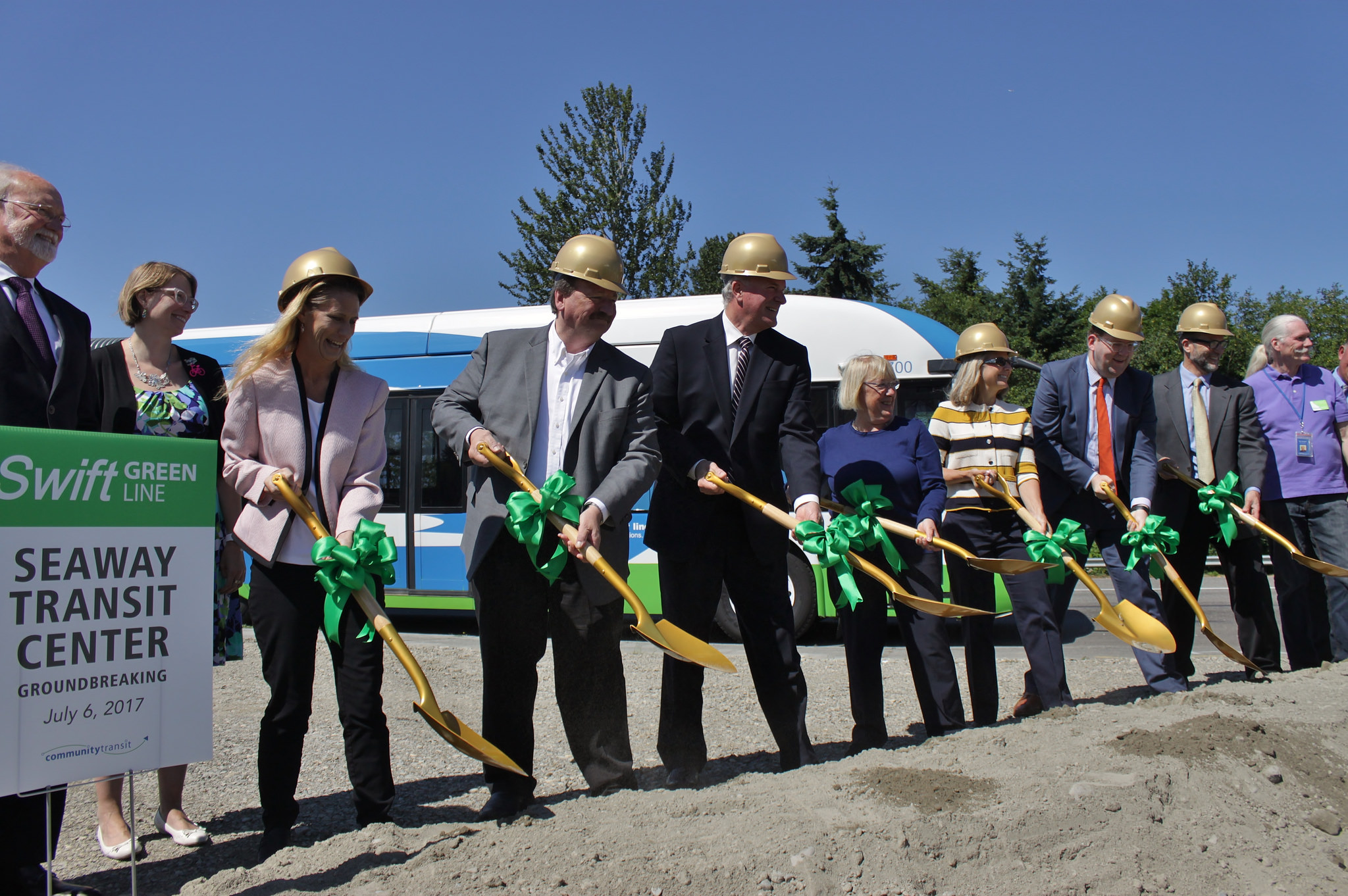 On a cloudless Thursday morning, Community Transit was joined by U.S. Senator Patty Murray, Boeing Vice President Elizabeth Lund, State Senator Marko Liias, representatives from WSDOT, and members of the press at a corner of the Boeing Everett assembly plant to break ground on the Swift Green Line. The groundbreaking happened at the future site of Seaway Transit Center, which will serve the Boeing plant and has been under construction for several weeks.

The Green Line, scheduled to begin service in early 2019, will be Community Transit’s second bus rapid transit line and serve the Boeing-Paine Field area of southwestern Everett, the Mariner Park and Ride, Mill Creek, and the Canyon Park area of northern Bothell. The line’s end points, the Paine Field and Canyon Park areas, are two of the county’s largest job centers, and will eventually provide transfers with ST3-funded services (Link at Paine Field and I-405 BRT at Canyon Park) in the near future; the line will also cross the existing Blue Line at Highway 99, requiring street crossings for some transfers. One of the line’s stations will serve the new Paine Field passenger terminal, scheduled to open a few months before the Green Line enters service, and will be about the same distance from the gates as the Sea-Tac Link station (though lacking in its new comforts, for now).

One of the project’s crucial links, crossing Interstate 5 at 128th Street SW near Mariner Park and Ride, has also begun utility relocation and construction. Community Transit will add a queue jump signal and “bus refuge” to the overpass, as well as bus-only lanes. Most of the Airport Road corridor, between Mariner and Seaway Transit Center, already has peak-only carpool lanes that will be used by Green Line buses, but the Bothell-Everett Highway lacks them. Community Transit’s earlier plans recommended that BAT lanes or queue jumps be considered for the corridor in the future, as traffic congestion grows and threatens Swift’s reliability. The Green Line will also be aided by a series of transit priority traffic signals, similar to those on Highway 99 for the Blue Line, along the entire length of its route. The $73 million project, funded mostly with a federal grant, has been in the works for about five years, developing slightly slower than the original Swift Blue Line (which went from approval to opening in approximately four years).

Like the Swift Blue Line, the Green Line will run every 10 minutes on weekdays and stop at stations spaced a mile apart (or more). Stations will have off-board payment, level boarding for wheelchairs and bicycles (accommodated with on-board racks), real-time arrival signs, and the distinct Swift signs (with the addition of a small “Green Line” logo). Community Transit will order 15 buses for the Green Line, which will be branded identical to the existing Blue Line buses for fleet interoperability. The next Swift project, the Orange Line, is scheduled to connect the Green Line in Mill Creek to Link in Lynnwood by 2023. After that, according to Community Transit, lines to Marysville, Cathcart, downtown Bothell, and 185th Street Station in Shoreline are in the works. Until then, Community Transit has regular construction updates on their website that interested readers can subscribe to. STB will also cover any major news coming from the Green Line corridor. Stay tuned.