Correction and Update: Some have pointed out that instant runoff voting doesn’t mathematically eliminate the possibility of “vote splitting”. They are correct. While it provides a way around the problem, it doesn’t guarantee everyone will fill out all the rankings. I stand by my claim that, in general, it is a solution to the forced vote splitting inherent in single-choice elections.

Some in the comments thread have claimed that approval voting eliminates vote splitting. I have offered trivial examples to show it does not, and contacted the Center for Election Science, a group that advocates the use of approval voting, whether that claim is true.

Here is the response from Aaron Hamlin, CES’ director:

This is more of a game theory issue. Approval voting allows voters to simultaneously hedge their bets while also supporting their favorite candidates. IRV fails to do this because IRV can divide first-choice votes and eliminate good candidates prematurely. IRV is, however, more resistant to this effect than plurality voting because of the way it can deal with candidates who are genuinely weak.

See here for an example: http://www.electology.org/center-squeeze-effect

We can also tell this from polling data (blog links to polling data) that compares voting methods.

In short, approval voting does not mathematically eliminate vote splitting. I stand by my claim that Rob Richie of the Center for Voting and Democracy (which advocates instant runoff voting) was libeled in the comment thread below.

The open mayoral election has exposed how inadequate our first-past-the-post voting system is for a modern city.

The conventional wisdom is that Jenny Durkan will survive the primary election, not just because of her financial advantage, but also because she represents a constituency that has managed not to split its votes among multiple candidates, at least in this election.

It would be enormously depressing to end up with a more strongly-whipped party mechanism, in which urbanists would agree to align behind a single candidate, while the anti-development coalition does likewise. I happen to like the chaos of several candidates, and the ritual of playing them off against each other to get changes made in how government works. I wish elections like these would happen more often.

Many of you are already familiar with ranked choice voting, in which each voter gets to rank all the candidates, as many or as few as she or he cares to. It is also known as instant runoff voting, as the ballots are used to simulate a series of run-off elections as the last-place candidates are eliminated one by one until someone has a majority of votes among all the ballots that didn’t run out of expressed preferences. 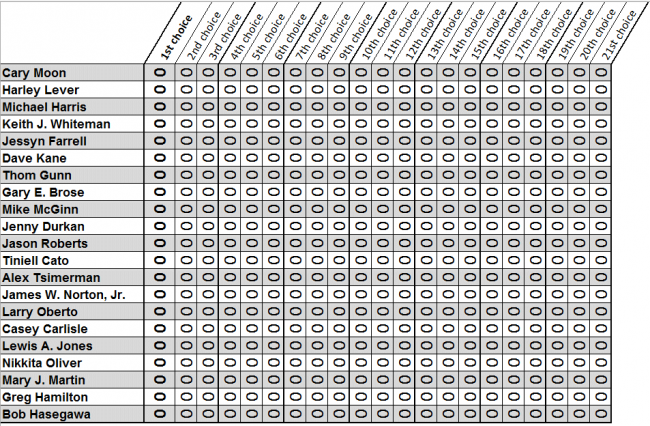 Among the commonly-mentioned benefits of ranked-choice voting are:

* resolving the “vote splitting” problem;
* discouraging negative campaigning that tends to plague one-on-one elections;
* reducing the costs of elections by only having one;
* better enfranchising military and overseas voters, by allowing more time for ballots to get to them, and get back.

Why has it not already happened here? The simple answer is inertia. We have always used first-past-the-post, so we always will, until someone in power (e.g. the city council) resets the default.

Ranked-choice voting could be implemented via a city charter amendment, ideally proposed by the city council, with an eye toward allowing enough time for any lingering technology issues to be dealt with. (The technology exists, but the county’s current supply of vote-counting hardware, especially for tallying paper ballots, may not be up to the task.)

The “vote splitting” phenomenon of the 2017 election is not a problem to be solved, but a teachable moment that will hopefully lead to the replacement of our antiquated voting system that doesn’t handle the free market of ideas very well. Indeed, holding an expensive election, just to get one piece of information out of each voter in each race, and then holding a second election (enabling insincere voting in the first election) is government inefficiency of the worst kind.