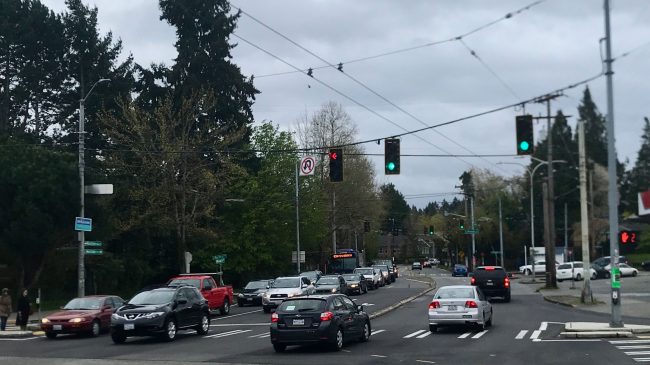 In another unfortunate setback for Vision Zero and the Move Seattle Levy, SDOT has elected to remove the dedicated bus lane planned for 24th Avenue to give more space to cars.

23rd/24th Avenue, home to the 43 and 48 routes and used by over 6,000 bus riders daily, is one of Seattle’s supposed “transit priority corridors” (a phrase that grows ever more meaningless), slated for RapidRide buses in 2024.  The 2015 Transit Master Plan called for bus lanes from Thomas St. to Roanoke St., almost all the way to the Montlake bridge.  As the plan has evolved, neighborhood opposition has increased and the bus lanes have been walked back, until this month, when they were scrapped entirely.

Another nice nugget: They got rid of the bus lane because people complained, not because data or research showed it wouldn’t work. What a joke. cc: @SeaTransitBlog pic.twitter.com/W2VhGEkl0M

The public comment is the usual incoherent mishmash (“make it safe for pedestrians and also we want to drive faster!”).  SDOT appears to have taken it literally but not seriously, as the saying goes.  Despite referring to the corridor as a “vital street for transit,” no effort will be made to improve bus service.  The agency is, however, proposing a “skid resistant surface” to be applied at the intersections where the most collisions occur.  So there’s that. And while the reduction in downhill lanes between John and Boyer will probably reduce driving speeds, the project has fallen disappointingly far from the original 2015 vision.

Several years ago, Jarrett Walker used Seattle as an example of “chokepoints” and transit design:

No North American city has more chokepoints than Seattle.  The city itself consists of three peninsulas with narrow water barriers between them.  Further barriers are created by steep hills in most parts of the city.  Nowhere in Seattle can you travel in a straight line for more than a few miles without going into the water or over a cliff.

…Transit planning is frustrating in such a place, but road planning is even more so.  Ultimately, Seattle’s chokepoints have the effect of reducing much of the complex problem of mode share to a critical decision about a strategic spot.  If you give transit an advantage through a chokepoint, you’ve given it a big advantage over a large area.

The Montlake area is one of Seattle’s major chokepoints, as traffic backs up in all directions approaching the intersection of Montlake Boulevard and SR 520.  Transit priority ought to be a no-brainer. WSDOT made the wrong call with the 520 offramp, which was quite unfortunate, but I expected more from SDOT.  As cost overruns pile up on other transit and infrastructure projects, red paint for bus lanes remains the cheapest and most effective way to move more people through our limited, chokepoint-filled right-of-way.