Two pieces of good news for bus commuters on SR-520: one next month and another in 2023.

Next month, WSDOT will install a temporary bus-only queue jump in the Montlake off-ramp.  This comes a few months after several advocates met with the agency to discuss potential improvements.  The queue jump will take advantage of excess shoulder space on the exit ramp, leaving the two car lanes intact. Unfortunately, the right-of-way narrows at Montlake Way, so buses will need to merge right before the intersection. Still, letting buses to the front of the line will probably save a couple of light cycles.

The re-striping will happen the weekend of Oct. 5-7, weather permitting, and the new bus lane will open Monday, Oct. 8. Kudos to WSDOT for listening to transit riders and moving quickly. The lane will be open for at least six months until Montlake lid construction gets underway. David Goldberg, WSDOT’s Ombudsman who has been liaising with transit advocates on this project, told me via email that how long the lane is ultimately in operation will depend on the contractor’s schedule, which should be finalized “in the next few weeks.” 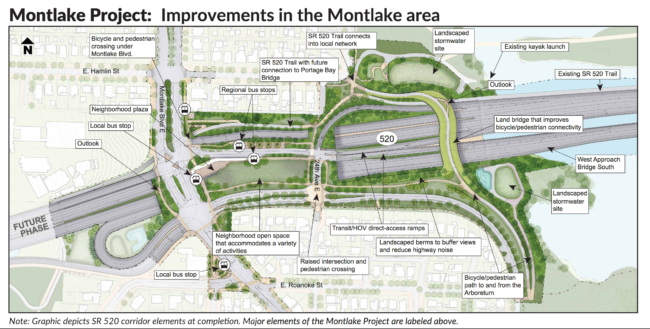 With the 520 freeway stop disappearing next year and more buses diverted to Husky Stadium as part of One Center City efforts, giving priority through Montlake — at least for a little while — is very welcome.

Next, WSDOT announced this week that the agency is pushing up the opening date of the transit connection from 520 to I-5, providing a direct bus path to South Lake Union.

Previously slated for the Portage Bay phase of the project (which wraps up in 2029), the WSDOT says the ramp will now be open to Metro and Sound Transit buses by 2023. HOVs (and, one assumes, private employer shuttles) will have to wait for 2029. The Seattle Times notes that this configuration adds a fifth express lane to I-5, so buses won’t have to merge in and out of traffic.

Since it connects to the reversible HOV lanes, however, it will only work in one direction at a time: heading into Seattle in the morning and leaving in the afternoon.

You may recall that Metro’s since-scuttled 2015 Eastside restructure tried to connect 520 to SLU via a revised 311 that took the long way up to the U-District and back via Eastlake, because buses can’t do the merge from 520 to the Mercer exit on the I-5 mainline. The new connection to the express lanes makes it possible.

We don’t know exactly which routes will take advantage of this new path — Metro is currently re-evaluating the North Eastside network — but it’s a fair bet that the routes like the 255 (Kirkland-Seattle), 545 (Redmond-Seattle) and 311 (Woodinville-Seattle) or their descendants would be candidates (this is all happening after the One Center City “period of maximum constraint”, so we’ll have to see what downtown street capacity looks like at that time). These routes could potentially even head into downtown via the Fairview-Virginia pathway that Zach sketched out a little while back. For Eastsiders in those cities headed to South Lake Union, it will be a huge improvement.