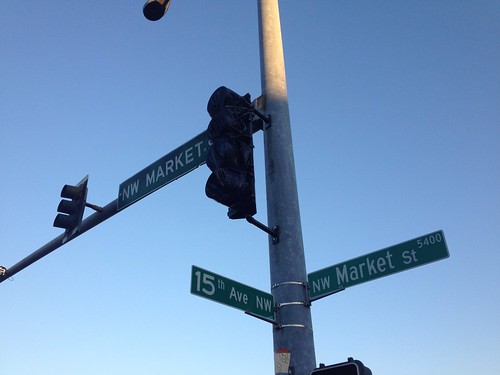 Where shall we put Ballard’s lone light rail station?

As Peter reported, Sound Transit is now in the process of reviewing the many potential alignments for Ballard/Interbay as we approach “Level 3” analysis. Last week’s Elected Leadership Group meeting (video link) was at times a reminder that needs of the riders who will eventually use this multi-billion-dollar system often play second fiddle to present-day concerns about inconveniencing businesses or car travel.

At the meeting, we heard concerns from the leadership about losing car lanes on 15th Avenue W through Interbay. We also heard about maritime businesses around the Ballard Bridge who might be impacted by a rail bridge. And, of course, we heard concerns that Seattle’s taste for expensive tunnels could impact Snohomish County rail projects.

While it’s completely understandable that we would want to build a train without wrecking our maritime economy, might I suggest we consider the needs of the system’s riders first and foremost? King County Exec Constantine and Ballard Councilmember Mike O’Brien hit the right notes in that regard. “For a rider,” Constantine said at the meeting, “it doesn’t matter where the line is, it matters where the stop is.”So again, where should the stop be?  20th & Market seems like a good balance of “old” and “new” Ballard, but alas it would require a long expensive tunnel across the wide part of Salmon Bay to get there. 17th is also fairly central but suffers from the same water crossing problems. 15th has always been the placeholder location, going back to the failed Monorail Project and even 1968’s Forward Thrust, and continues to be a logical option.

And yet at the ELG meeting, 14th is emerging as a path of least resistance. An approach via 14th avoids Fisherman’s Terminal and has the best options for crossing the bay (a fixed bridge for an extra $100M above the project baseline or a short tunnel for an extra $300M).

There’s a big downside, however: 14th & Market is a bad spot for riders, as Seattle Subway has pointed out. 15th & Market, just one block over, is superior.

A 14th Avenue station would force thousands of riders to cross 15th Ave every day on foot to get to and from central Ballard. The bike path is over on 17th and there’s no good way for bike riders to cross Market, either. An underground pedestrian tunnel might eliminate the traffic light penalty, but still add 3-4 minutes walking time and make some riders feel unsafe. Transfers to and from buses going north to Crown Hill and Northgate would be difficult.  Finally, 14th & Market is the far edge of the urban village, abutting single-family zoning.

The station ought to be designed such that riders can enter and exit from the west side of 15th Avenue, without having to wait for a traffic light and ideally without having to walk two football fields over to 14th, even in a dedicated pedestrian walkway. A compromise alignment that Constantine suggested, where the train approaches on or under 14th but then stops at 15th, seems like it could work.

The length of the platform is more than enough to have entrances on the south side of Market St., on each side of 15th. Nobody should have to cross traffic on Market St or 15th to get into or out of the station. That’s how the walkshed of the station gets maximized.

Let’s avoid previous mistakes, like terrible pedestrian access and awkward bus transfers (e.g. Mt. Baker), siting the station on the wrong side of the street (UW), or pushing the station to the far edge of the urban village (Roosevelt).  We get one shot to build one station that will last for 100 years.  Let’s not screw it up.