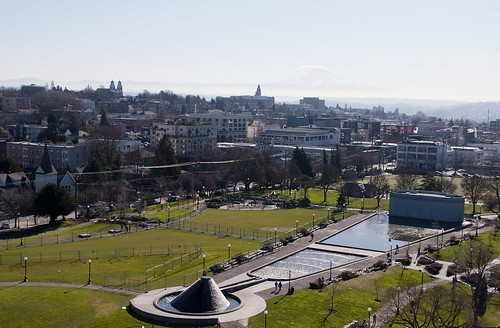 The Times‘ David Gutman got a rare glimpse at Uber and Lyft’s trip data for Seattle.

The data show that ridesharing is most popular in the neighborhoods ringing Lake Union (Capitol Hill, Queen Anne, Ballard, Fremont, Wallingford), many of which also have higher rates of car ownership.

Is it surprising that the inner-ring residential neighborhoods would score high for rideshare? Though close to downtown, taking transit to and from downtown jobs can be quite slow compared to, say, an express bus from Northgate or Bellevue. Capitol Hill has Link, sure, but that’s not super useful if you’re headed to, say, South Lake Union.  A three-mile trip from deep in the CD to a far corner of SLU  could involve two buses and easily take an hour (and be time competitive with walking, if there’s even a hint of traffic).   Or, if you’re trying to board a bus in Fremont or Ballard headed downtown, it might be so crowded by the time it gets to your stop that it just passes you by.

In that context, using Uber or Lyft for your daily commute is appealing, if one has the privilege to do so.  Depending on the commute, and using the shared ride feature, the monthly cost could be in the ballpark of a downtown parking spot.  It takes half as long as the bus, and you get to check email from the back seat. A smart choice for the rider, perhaps, but what is the impact to the city as a whole?

The Times piece suggests that these rides are worsening congestion, although the degree of impact is unclear.  Ridesharing and carpooling together account for about 10% of commutes into the city.  We don’t know how many of the 91,000 trips had more than one passenger, but other data suggests that it’s between a fifth and a third.  Either way, these trips are adding cars, but they’re clearly not the primary cause of traffic.

To the extent that something can be “done” about rideshare-induced congestion, clearly the answer is to get more people on the bus by implementing all of my personal policy preferences, such as making buses faster by adding more bus lanes.  And of course building out light rail throughout these neighborhoods as part of ST2 and ST3 is the long-term solution.

More immediately, though, this is an area where the Durkan administration has the right idea. Decongestion pricing – which Uber already supports! – will put a thumb on the scale in favor of other modes of transportation, allow traffic to move more freely, and generate revenue that can support more and better public transit.