It was disappointing to learn that 3 of the 7 RapidRide corridors planned for the Move Seattle levy have been postponed indefinitely.  Fortunately, the most effective way to improve transit is also the least expensive: red paint. 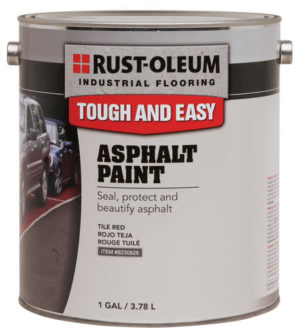 The Mayor’s budget promised 100,000 new bus service hours.  It’ll be a shame if those hours are spent idling in traffic.  Increasing the city’s stock of red bus lanes will make our transit dollars go even further while reducing the city’s carbon footprint and providing a real alternative to driving.

For the first time in a really long time, we’re primed to take advantage of transit priority. The Metro bus network has never been better: thanks in large part to the city’s funding, buses are coming more frequently and serving more destinations.  Now we just need to get them moving faster.

In that spirit, I went back to the original Transit Master Plan look for improvements to the 40, 44, and 48, the three routes that were cut from Move Seattle’s RapidRide program.  By adding bus lanes in a few key spots, SDOT can get many of the advantages of RapidRide at a far lower cost.

Of course, I couldn’t stop there. I polled the STB staff for suggestions on other places where transit priority would help.  The result is seven places for transit priority, distinguished in that they are short stretches of road approaching a chokepoint.

Ridership numbers are from 2016, the most recent available, and have no doubt increased substantially since then.  For the purposes of this post, I’ve ignored other planned RapidRide lines (Route 7, Route 120, Roosevelt-Eastlake, Madison BRT), assuming that they’re still on track for whatever transit priority they’re going to get. 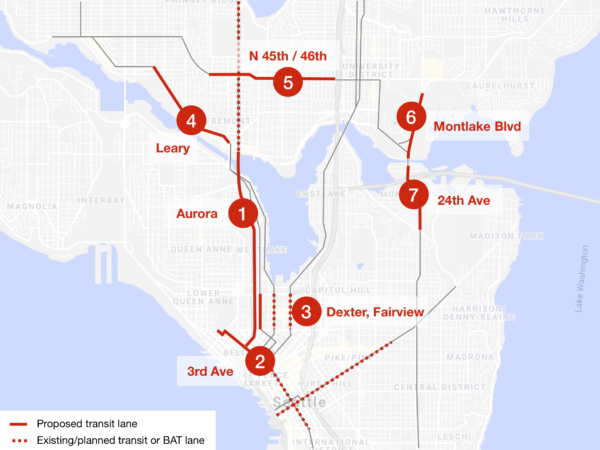 The E Line is a ridership monster and will continue to be one for decades. And yet, it only has partial bus lanes for part of the route: Business Access and Transit (BAT) lanes in North Seattle and a transit lane in one direction through Queen Anne. Let’s get it out of traffic with dedicated lanes all the way into downtown along Bell/Battery and into 3rd Avenue. The bridge will be a bit tricky, but the rest of the way should be straightforward.

The extension of Third Avenue’s transit operations to “all day” was welcome, but unfortunately the bus priority stops in Belltown.  That needs to change.  Dozens of buses that run through that stretch every day serve Queen Anne, Magnolia, Ballard, Greenwood, Broadview, Phinney Ridge, and Fremont — two entire city council districts.

Route 62 crawls up Dexter Ave N during rush hour. Dexter maintains two parking lanes, which is insane considering that the garages in South Lake Union have room for far more cars than could physically enter the city on any given day.  Give the young Route 62 a chance to shine with transit priority through an increasingly contested South Lake Union.

Meanwhile, bus lanes are already planned for part of Fairview as part of the Eastlake-Roosevelt BRT project, but not all the way through Mercer. Let’s fix that, especially since Eastside buses headed downtown could be rerouted to use Fairview as well.

Route 40 gets jammed up approaching the Fremont Bridge.  This is one of Metro’s most popular routes, and one that can’t seem to add enough buses to meet demand. Bus priority between Ballard and the bridge ought to do the trick. Once you’re across the bridge it’s relatively smooth sailing until South Lake Union, where it shares a dedicated lane with the Streetcar.

Every time we interview candidates for Seattle City Council, they tell us that they want to make east-west transit connections in this city easier.  It’s a laudable goal, and one that they must hear constantly on the campaign trail.  Well, here’s an opportunity to make them happy.

There’s only one in this city north of the ship canal that goes uninterrupted from Puget Sound nearly to Lake Washington.  SDOT estimates huge potential gains in the 45th/46th/Market corridor if buses are allowed to flow freely. While the whole street could use bus priority (especially after Ballard Link opens), for now we’ll settle for the central section between Phinney Ridge and I-5.

The part of Montlake Blvd between U-Village and Husky Stadium is notorious for backups as it approaches Montlake Bridge from the north. Metro currently avoids it altogether, routing the 31, 75, and 372 instead through UW campus on Stevens Way.  This makes for a worse transfer to the UW Link station.  A bus lane, even only in the southbound direction, would make it possible to run buses right to UW station and provide better Link transfers for NE Seattle.

This one’s the flip side of #6.  Approaching the bridge from the south, buses tend to bog down in the afternoon peak, affecting Routes 43 and 48.  SDOT had originally planned bus lanes here, but backed down due to neighborhood opposition.  If not now, then 2024, after the Montlake lid is rebuilt and construction in the area dies down, would be a good time to revisit the issue.

What’s most interesting to me about this list is just how short these sections are.  In most cases we’re talking about less than a mile, in a city with over 4,000 lane-miles of streets. It seems like an easy win for tens of thousands of daily bus riders.

Bus lanes are cheap because they require expending political capital more than financial capital. But if the mayor truly wants to put a dent in our climate emissions, despite the financial clouds she sees on the horizon, bus lanes are the perfect way to do it.