At Othello, blocking at least some of the track. No further details at this time.

Update: Sound Transit has released for the following statement:

At 4:20 p.m. today a northbound Link light rail train struck a northbound vehicle that apparently ran a red light to make an illegal left hand turn at Othello Street South. The driver of the vehicle was transported to the hospital with non-life threatening injuries, and medics tended to three Link passengers who had minor injuries. Local news media covered the incident. Light rail trains had to single-track around the accident, causing delays, until the scene was cleared just after 5 p.m.

I. Yesterday was the day that the EPA issued new vehicle emission rules that will raise mileage standards across the board in the United States. Obama announced the plan early in his administration, and it was spurred on by governors from various states, including our own Christine Gregoire. No foolin’.

II. The day before, Obama announced the government would make much of the east coast available for off-shore oil exploration and drilling. He said during his announcement: “But what I want to emphasize is that this announcement is part of a broader strategy that will move us from an economy that runs on fossil fuels and foreign oil to one that relies more on homegrown fuels and clean energy. And the only way this transition will succeed is if it strengthens our economy in the short term and long term.”

III. The week before that, the Obama administration said it remains firmly opposed to a gasoline tax increase to fund the next federal transportation bill, even though many point out an increase could reduce emissions and raise substantial revenues.

The Community Transit board, having not been given additional funding flexibility by the State, finalized their draconian June service cut, eliminating all Sunday service and making deep reductions in weekday and Saturday service.  They did approve the late proposal to modify routes 247 and 277 to keep some service in Stanwood and Gold Bar.

CT’s webpage on the changes is here.

Central District News is reporting, in an impressive scoop, that the city is developing a transit master plan, in the model of the city’s bicycle and pedestrian master plans. They quote the mayor’s office:

The new Transit Master Plan, which we expect to begin developing within the next few months, is envisioned to serve as a blueprint for transit investments in the same way that the recently adopted Bicycle and Pedestrian Master Plans are guiding the development of improvement to help make biking and walking easier in Seattle.

Seattle Department of Transportation spokesman Rick Sheridan outlined the broad goals of the transit master plan to the neighborhood blog:

When asked about how much public feedback would be incorporated into the plan, Sheridan told us that “public involvement is absolutely needed” to shape the plan.”

“There will also be an advisory committee supporting the work made up of members of the public,” Sheridan said. “However, full details concerning these elements have not yet been worked out.”

The plan is scheduled to be completed by the end of 2011.

You can reach us for sales and advertising information by contacting Zach Shaner at advertising at seattletransitblog.com.

Whatcom Transportation Authority is trying to save their transit service.

In the last year, they’ve been forced to cut $2 million in service – and they’re looking at another $4 million in cuts next year, including most evening and all Sunday service. That cut would be devastating – WTA had the highest percentage ridership increase of any agency in the nation in 2008, with 32% more riders – Whatcom County has a huge number of transit dependent rural, fixed-income, and student residents.

Whatcom’s GO lines have only recently started offering 15 minute service – the agency has been trying very hard to provide services that let people actually live without a car, and now they’re one of the hardest hit by the recession. A sales tax increase is their only option to raise more revenue, and it’s a hard sell.

If you want to help them out, have a look at Transportation Choices Coalition’s post about the campaign. I don’t know if we have many readers from up that way, but if you have friends at Western, this would be a great thing to call them about.

Yesterday, the city council released the executive summary from its 520 replacement study. The conclusion? Basically, there aren’t any options on the table that meet all of the councils goals effectively, but the city council could pursue some changes on the margins. Publicola reports:

In addition to suggesting that the city council push for higher occupancy minimums for HOV lanes and continue to work with the legislature for more transit on the bridge, the council’s report recommended that the state reduce the size of the Montlake Interchange on the Seattle side of the bridge; ditch a proposed seventh lane over Portage Bay, instead using bridge shoulders for merging and I-5 exiting; and working to reduce the impact of traffic on the environmentally sensitive Arboretum.

The Times also has a nice break-down of the report.

In related news, the Mayor’s office was planning on releasing its report about light rail over the new SR-520 span but now they’re planning on “putting it out early next week,” according to Aaron Pickus, a spokesman for McGinn.

King County Metro has posted a data file that defines all of its routing and scheduling information to its servers for anyone to access.

The data is in the GTFS format, which stands for Google Transit Feed Specification. This feed powers Google Maps’ transit directions and third-party services like One Bus Away. Transit agencies across the world are exporting their data to the de facto industry-standard format, so some applications based around GTFS that are built for Portland’s data, for example, could also work for Seattle depending on the context.

“King County is home to some of the best and brightest tech minds in the world, and we want to tap into their ingenuity,” said Metro General Manager Kevin Desmond. “Our customers love the apps that are already out there for their phones and computers, and we think there is a lot of potential to create more.”

Metro began opening up the feed late last year, but this is the first time that anyone can access the data without first contacting the bus agency. Developers can access the data file directly online, but must agree to King County’s terms of use. Notably, the terms do not prevent developers from profiting from their use of the data.

Most transit agencies do not post their feeds directly online, and Metro is taking a progressive step that should be applauded. 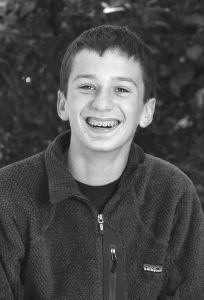 Over the last few years, STB grown into a pretty significant site, and an essential source for people interested in transit in the Puget Sound region.  Now that the site’s credibility is well established, it’s time to come clean.

The actual author of this site is me, Joey DiCarlo, pictured at right.  I’m a Greenwood resident and a student at Ingraham High School.  The STB bylines you’ve seen here for years have been carefully constructed identities.

And what a lot of effort it’s been!  Maintaining several different email addresses, keeping track of which “writers” cover which issues, trying to develop a unique style for each… probably the hardest part was getting some of my father’s friends and coworkers to play the roles of the STB staff for the meetups and provide photos for the About Us page.

In retrospect, I don’t think all my characters were that successful.  I ran out of stuff for Andrew to write and had to “retire” him.  John and Martin sort of sounded alike.  Ben was sometimes a bit over the top, and I never found much occasion to use Oran or Eric’s voice.

Why go through all that trouble?  It’s hard to get taken seriously when you’re  a 15-year old high school student blogging out of your parents’ basement.  And being known as the author of a serious blog can complicate the social life of a teenager.  But now, it’s time to end the facade.  I think I’ve proven my credentials with my body of work on this site; I hope you’ll stay with us me as I continue to advocate for improved public transit in Seattle.