In two previous posts on STB, I’ve discussed the possibility of improving Route 16 based on timepoint data showing unreliability on one problematic segment, and presented detailed stop-level data showing ridership patterns on Route 36. In this post I’m going to meld the two and suggest improvements to the Route 10/12 pair that would improve reliability and more closely match service with ridership, introducing savings by limiting service to 1st and 19th Avenues.

Routes 10 and 12 stand out immediately on a map of downtown’s bus service as they possess a unique through-routing arrangement: trips from the 10 come into downtown on Pine St, turn into 12s, head down 1st and turn left on Marion; similarly, 12s come in on Madison, turn in to 10s, and head out on Pike. (Two late-night trips on the 10 turn back on Pike St and head back to Capitol Hill; service on the 12 ends before service on the 10). Unlike typical through-route patterns, such as from Ballard to West Seattle, this does not have the effect of reducing bus travel time through downtown, or providing one-seat rides between popular destinations: surely no-one is going to ride from Capitol Hill to First Hill via 1st Ave. The main benefit is that it saves a short walk for some riders going to or from stops on 1st Ave.

As part of the regular pattern, Routes 10 and 12 serve four stops on 1st Ave: northbound just south of Seneca, and just north of University; and southbound mid-block between Union and University, and between Seneca and Spring. The Seneca/Spring stops are two blocks north of the nearest stops on Madison and Marion; the Union/University stops are about four blocks walk to 4th & Pike, which all service from Downtown to Capitol Hill passes through. If these stops were closed, it seems likely that virtually all current riders would simply switch to the nearest open stop, which for most people would probably be two to six minutes walk away.

Much more below the jump. 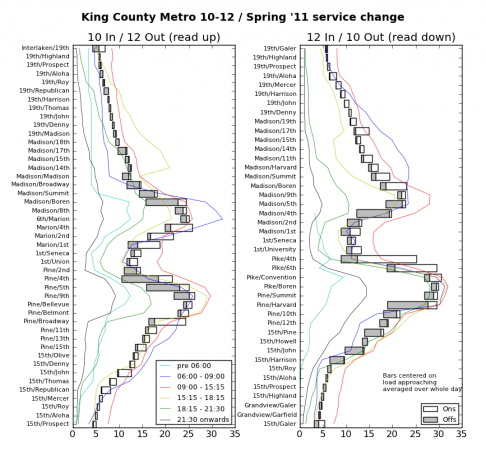 This chart, in the same format as my post on Route 36, presents a lot of data*, and I suggest taking some time to examine it in depth and understand all the patterns it shows. One thing stands out immediately: a vaguely camel-like “double hump” where buses carry heavy loads and stops are busy on the east-west portion of the routes, but 1st Ave is comparatively quiet and lightly loaded. Given that, and the fact that closing them would probably lose almost no riders while reducing bus travel times through downtown, there already seems to be a case for splitting the through-route and switching to a “live loop” configuration where each trip heads straight back out from 1st Ave.

In fact, there’s a better reason to favor a live-loop configuration. Travel times southbound on 1st Ave are quite variable and often quite slow, and have become more so since construction for the Alaskan Way Viaduct project began, a situation likely to persist until the Deep Bore Tunnel opens. Uncertainty in travel time is the bane of reliability and on-time performance, arguably more important than travel time itself. Unlike the situation with Route 16, there is no apples-to-apples comparison to be made between the through-route and live-loop alternatives. What we can do instead is compare 1st Ave’s variation in travel times to another busy downtown transit street, 3rd Ave: 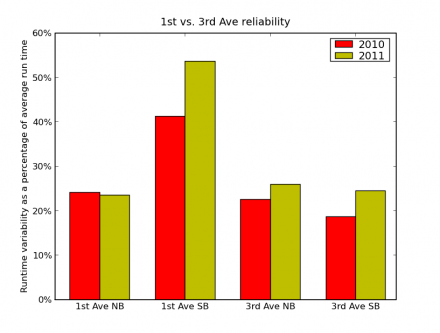 The timepoint data here are from 3rd & Union to 5th & Jackson and from 1st & Union to Madison or Marion. Because these route sections are different lengths and have a different numbers of stops, comparisons of travel time or of absolute variation in travel time are meaningless. Instead we compare the relative variation in travel time. The data confirm that 1st Ave southbound is significantly less reliable than comparable streets. A live-loop configuration will be much more reliable than the current through-route, because there is much less exposure to traffic on 1st.

Previous discussions of potential bus network restructures on Capitol Hill have often lead to a vigorous and lengthy debate on the merits of bus service on 19th Ave. I’m unpersuaded by any argument based on land use or zoning that  service is warranted on 19th Ave. Most of the growing residential density I see on 19th is between John and Madison, within walking distance of the 10, the 11, the 12 turnback wire and the 43. North of John, land use patterns seem comparable to Ballard, where a half-mile grid transit seems to work just fine; deleting the 19th Ave segment of the 12 would align North Capitol Hill more closely with the level of service that other areas of the city receive. As Martin put it, we cannot build a sensible transit network where everyone is within a block of a one-seat ride downtown, and that applies to Capitol Hill as well as the Rainier Valley.

To this discussion we can now add ridership data showing how 19th Ave service is used. I think the answer is “not much, most of the time”. Nighttime ridership is practically nonexistent, evening ridership is very weak, and only the peaks show moderate ridership. Even if you believe that the gentle slope between 15th and 19th is a barrier to mobility (which I don’t), the very highest level of service that could be justified here is hourly lifeline service mid-day, no service after 7 PM and scheduled peak trips as needed to meet demand. Personally, I’d terminate all trips on First Hill and add peak trips as-needed to the 10.

My very rough estimate is that my proposals in this post — deleting the through-route, terminating all 12s at First Hill — would reduce run-times on the 12 from about 25 minutes to 19, a 24% savings (offset slightly by the possibility of having to add more peak trips to the 10) with minimal loss of ridership, while improving reliability and maintaining mobility. As an aside, Route 10 does not suffer the limitation of only running 40′ coaches that the 12 does due to the hill breaks on Madison. If Metro buys a higher percentage of 60′ trolleys when they replace the current fleet, it would be possible to nearly double the capacity of the 10 without significantly increasing operating costs.

*The chart omits the stops on the turnback wire at 13th and 15th as an alternative terminus can’t really be represented well in with this visualization. Of course, omitting them introduces some other artifacts, for example the load in the PM peak appears to jump between 15th and 17th. This isn’t because lots of people get on there, but because, east of Broadway, the many buses that terminate on First Hill are more lightly-loaded on average than those few that continue to Interlaken. The chart also omits the little-used stops on S Jackson and 1st Ave south of Madison that are served only a few times a day.