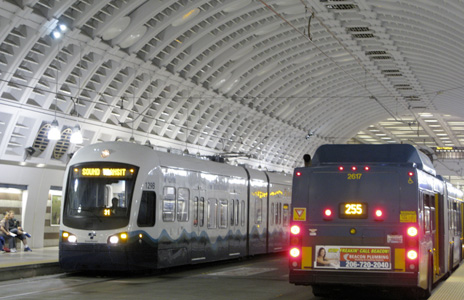 King County Metro and Sound Transit are still in discussions about which, and how many, buses to run in the Downtown Seattle Transit Tunnel after U-Link opens in 2016. Sound Transit and Metro are looking at running 40-50 buses in each direction during the peak hour, assuming 6-minute headway on Link trains, according to Sound Transit spokesman Bruce Gray.

Gray noted that Metro and Sound Transit meet frequently to discuss ways to improve joint tunnel operations, and can decide to move a bus route out, among other measures, if on-time performance doesn’t meet expectations, although the expectations are currently being met. King County Department of Transportation spokesman Jeff Switzer noted that, in addition to other ways of decreasing dwell and waiting time, Metro is looking at having only one bus bay per platform, perhaps even before U-Link opens.

Also still under discussion is the date buses will leave the tunnel forever. Although Sound Transit has been planning for a 2019 date, the King County and Sound Transit spokesmen did not deny that joint operations might continue until Northgate Link opens in 2021, and perhaps as late as East Link opening in 2023.

What does not appear to be on the table is Link frequency 2016-2021, and the possibility of running longer trains outside of peak. While Sound Transit has enough Light-Rail Vehicles to run 3-car trains at 7.5-minute peak headway, and can fit up to 104 LRVs at the current base, Gray pointed out that running 3-car trains all day would increase LRV mileage and maintenance costs significantly, and that off-peak ridership is nowhere near enough to justify longer trains. Sound Transit will be able to deploy 3- or 4-car trains on short notice to clear crowds. Two Link operators are kept on standby in case extra trains are needed.

However, 3- and 4-car trains will not be able to operate in the tunnel until after U-Link opens, due to safety restrictions. Sound Transit (via Gray) dismissed Glenn’s suggestion of de-coupling and recoupling trains due to safety considerations and the operation taking longer than two train cycles to perform.

I used current trip counts and times, the long-range plans for ST Express bus service additions in the 2014 Service Implementation Plan, and Metro’s April 2014 proposal for route reorganization to estimate what the bus volume picture might be in 2016.

All the all-day Metro-operated I-5 and I-90 express bus routes remaining after 2016, and the other peak-only routes going to the primary destinations of those routes, might fit in the tunnel, albeit somewhat tightly, with 6-minute Link headway (assuming there will be no express buses from the U-District or coming into the Central Business District from SR 520). The tunnel routes under this scenario would be 41, 101, 102, 150, 216, 312, 522, 550, and 554. Based on current trip-count plans, this scenario would result in up to 48 northound trips per hour, but 19 of them would be deboarding. There would be up to 46 southbound buses per hour, with 8 of them deboarding. This count shows a way for Sound Transit to help meet Metro’s peak tunnel usage goal, while protecting reliability, by moving routes 522 and 554 into the tunnel, using up bus slots with deboarding buses.

Sound Transit appears to have a case that the marginal gains from putting more buses in the tunnel at 7.5-minute Link frequency are outweighed by the extra wear, tear, and maintenance on LRVs from unnecessarily running 3-car trains all day.