It’s high time for a resurrection of this blog’s classic Transit Report Card series, in which STB writers wildly generalize another city’s transit system based on limited experiences.

I’m here to report from two separate car-free trips to Washington, D.C., home to the (in)famous Metrorail system. Over the course of two cumulative weeks in October and June, I managed to ride the entire 117-mile system, on a car of each of the seven fleet series, the near-infamous streetcar, a few Metrobus and DC Circulator routes, and Capital Bikeshare for good measure; unfortunately, I didn’t have quite enough time to fit any commuter rail service into my trip. The second trip also coincided with the first month of “SafeTrack“, a massive maintenance and repair program that is systematically shutting down and reducing service on a new segment every 2 weeks, give or take, until March (or longer).

Enjoy this ride-by review of the other Washington’s transit system, complete with a gallery at the end.

The Metrorail system is the 2nd busiest rapid transit system in the country, and one of the oldest in the post-war class that nearly included Seattle. Since 1976, the network has expanded into 6 lines that sprawl across the District of Columbia, Maryland and Virginia, with stop spacing and park-and-rides in garages that make it a suitable commuter rail system. It covers most of the region’s major destinations, some of which developed around the system, and was a part of just about every trip I needed/wanted to make. A handful of popular places like Georgetown are excluded from Metrorail, but are not completely inaccessible if you know to use Metrobus and could be on the cards for a future expansion.

Under normal circumstances, trains are fairly frequent during the day and one would not need to look at a schedule (not that there are any to look at). At night, however, frequency drops make transfers a bit of a hassle, especially when the stations aren’t in the best of shape or well-trafficked by security.

During my June trip, I stayed at a hotel in Tysons Corner near the end of the Silver Line in suburban Virginia, coinciding with the middle of SafeTrack work that single-tracked trains through the area. Silver and Orange line trains that I rode were subject to considerable delays and frequencies in excess of 18-20 minutes even at rush hour, resulting in serious crowding at Ballston and further along the heavily-developed Arlington corridor.

The passenger information systems at the stations are very good, to say the least. The signs at every station platform display the next three train arrivals in a given direction, with the line, terminus, and number of cars. The latter is given an additional feature in the form of colored numbers for 8-car trains, which allows passengers to spread themselves out a bit further along the 600-foot platform (aided by helpful stickers on the ground) or wait and gamble on what should be a less-crowded train.

The information once you boarded trains, however, was very lacking. All but the newest 7000-series cars are not guaranteed to have working text and voice announcements for stops, with operators using their poor PA system to barely say the upcoming station. I took to the habit of counting stops until my egress point, using signs at the stations to confirm the train’s location.

Transfers between Metrorail lines were easy enough with SmarTrip, the regional fare card, which I loaded weekly passes onto for unlimited rail riding to avoid some of the steep rush-hour fares.

Depending on the region, Metrorail either chose the most effective or ineffective routes to serve the region. In suburban Virginia, the outer reaches of the Silver, Orange and Blue lines use freeway medians to great effect, though they eventually switch to tunnels near Downtown DC. Thankfully, pressure from Arlington residents during the planning process routed the Orange and Silver lines under Wilson Boulevard from Ballston to Rosslyn, sowing the seeds of an excellent stretch of dense transit-oriented development.

Some of Metrorail’s outer reaches are freeway-running, utilizing the medians of Interstate 66, the Dulles Toll Road, and the Anacostia Freeway; other segments use railroad right-of-way that may parallel active tracks used by freight and passenger services (Amtrak and MARC/VRE); and some manage to still use tunnels, like at the eastern end of the Blue and Silver lines and the northwestern branch of the Red Line.

Metrorail runs completely grade-separated, as required of third-rail systems, and has a healthy amount of buffer space when it runs on the surface, separated by lanes of freeway or freight/commuter railways.

And speaking of commuter railways, the Virginia Railway Express (VRE) and Maryland Area Regional Commuter (MARC) both use shared right-of-way that is owned by CSX, Norfolk Southern and Amtrak. While this isn’t an ideal setup, it seems that delays are relatively minimal and weekday service is plentiful, unlike what we have with BNSF.

The final rail system in the region, the streetcar, runs completely in shared lanes that get a bit congested during rush hour, but are otherwise an acceptable choice of right-of-way.

Buses, of course run in mixed traffic, with a few bus-only lanes starting to come online (though not comparable to their 1970s network). They do, however, utilize shoulder-running buses much like we’ve started trialing and would expand under ST3.

For all its faults, Metrorail has forever changed the landscape of the DMV (District-Maryland-Virginia) region, with visible pockets of transit-oriented development sprouting up around stations across the system. Of particular note is the two main corridors in Virginia—the Ballston-Rosslyn corridor on the Orange and Silver lines; and the Pentagon-Crystal City corridor on the Blue and Yellow lines—which had a substantial amount of dense, mixed-use development that varied in age and size.

Out west on the Silver Line, Metrorail seems to be happening upon existing development more often than influencing new ones. Tysons Corner had been sprouting clusters of office buildings for decades, with no real hope for a walkable environment at street level. Even then, my “home” station, Spring Hill, was in the shadow of a brand-new 34-story luxury condominium tower sporting a parking garage podium taller than most buildings in the District of Columbia (restricted by a century-old height limit).

Even the new streetcar, which began running in February after years of delays, has started to attract some development. A walk around the eastern terminal to the north of RFK Stadium shows a lot of potential for revitalization and redevelopment of gas stations and strip malls to complement the neighborhood’s historic rowhouses.

Washington, D.C. is famous for its rail culture, with strict adherance to the “stand on right” rule on escalators. It is also well known for its apathy towards Metrorail and WMATA in general, with ridership starting to fall in recent years as other options have emerged. Overall, the other riders kept to themselves and were completely respectful of one-another, which is all that we can really ask for.

WMATA is not known for being a good communicator, especially during delays and incidents on the tracks. A legion of unofficial Twitter accounts instead relay information for riders by listening in on radio feeds. They proved handy for avoiding certain problem spots as delays and overcrowding are a daily occurrence somewhere on the system.

The distinct coffered ceilings designed by Harry Weese for the oldest of Metro stations is iconic and widespread in use, and reminds many of our Pioneer Square Station. After a while, though, it becomes boringly repetitive and can be easily categorized into groups and styles, as Greater Greater Washington did in 2014. The high ceilings give plenty of room to breathe and don’t feel claustrophobic. The lights are set on the tracks, which means trains stopping on one side of the station will dim part of the ceiling every few minutes.

One of the more unusual designs is at Anacostia station on the Green Line, which features the arched vaults of the system, but rotated 90 degrees, creating a wave-like effect. The area’s water table forced a shallower station that has little clearance with I-295 and a freight railroad above the surface. 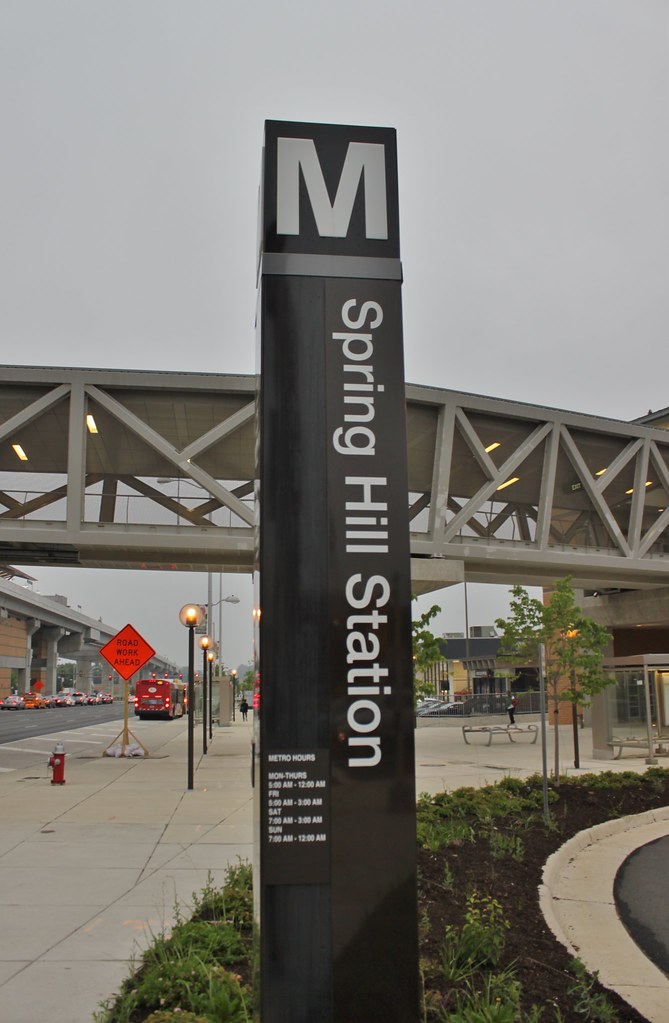 Outside the stations, the simple Metro pylons with station names in huge font and colored dots is a welcome navigational aid and much more effective than our cluttered downtown station signs.

Riding Metro during relatively hot weather gave me a whole new appreciation for Sound Transit and the cleanliness of Link trains. The older cars in the fleet still sport carpeted floors with visible stains of unknown origin, and seats have more than a few tears and stains themselves. The stations suffer from a lack of good cleaning, with the famous vaulted ceilings covered in a layer of grime and tracks with plenty of litter.

As for Metro’s infamous safety record, I did not run into any incidents where I really feared for my life. There were several times where the stopped train I was riding started to slide backwards while waiting to accelerate, and another where a driver seemed to overtake too hard on a curve and throw everyone to one side, but none were apparently harmed.

Metrobus and the streetcar, on the other hand, were fairly clean and felt safe with the proliferation of cameras around.

Metrorail is certainly a textbook “do this, but not this” example of how to operate a regional rail system, combining suburban commuter rail with intercity subway in a reasonable enough manner. The mistakes that Metro has had in their overall maintenance and safety is already teaching younger systems (including our own) to invest in those fields, hopefully preventing similar problems from sprouting up. I’m eager to see what steps Metro will take next to try and regain some of its lost ridership and improve the system, as SafeTrack is not scheduled to end until March.

For anyone interested in the Metrorail system and its history, I recommend picking up Zachary Schrag’s excellent “Great Society Subway“, an in-depth account of the system’s history and all the struggles that came with building it. For those who want to follow the current issues plaguing Metrorail, I recommend the weekly Metropocalypse podcast hosted by Martin Di Caro, a report for the region’s NPR News affiliate. 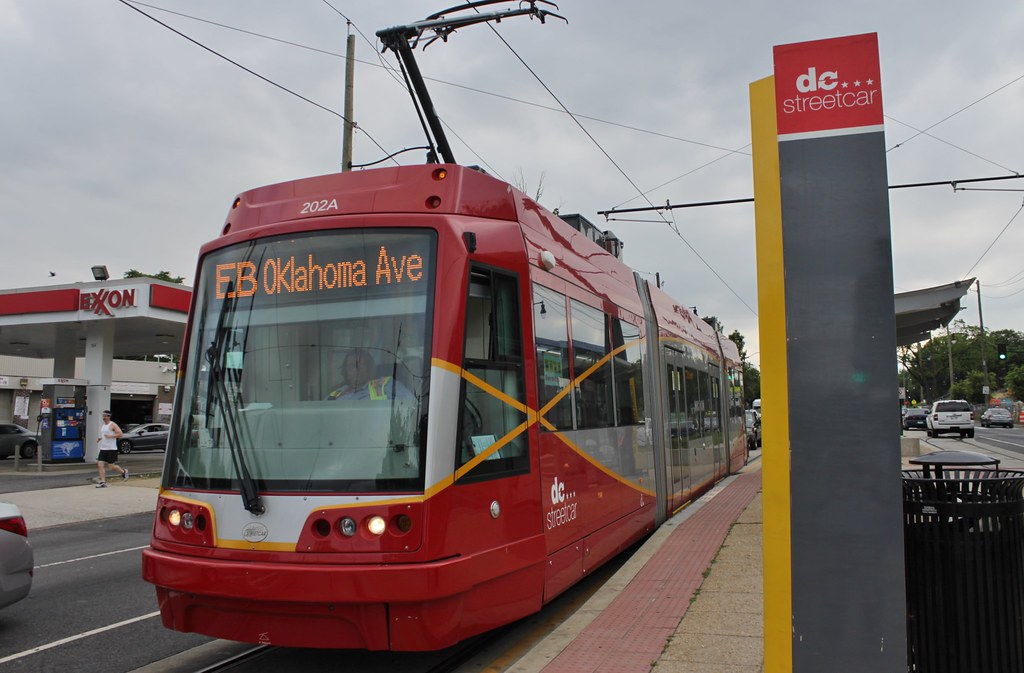