As the public comment window for Sound Transit’s West Seattle Ballard Link Extension draft environmental impact statement (DEIS) comes to a close, it’s time to make your voice heard about what will be built as part of ST3.

As always, powerful stakeholders who do not prioritize transit quality are very well represented in this process – we need your voice to make sure that our leaders hear from future transit riders.  When evaluating options, we focus  on what will be best for transit riders: reliability, expandability, and accessibility.

There were a lot of surprises in this round of Sound Transit planning. Some of them were positive, such as options in West Seattle that seem to address both community and transit riders’ concerns, and cost parity between elevated and tunnel options in both Ballard and West Seattle.

Some surprises were cause for alarm, such as deep stations, slow transfers, and lack of options that serve Central Ballard and South Lake Union. Sound Transit made significant steps  during this round but still has a long way to go. Sound Transit needs to study more options; because of that, we are not ready to recommend specific options for every alignment and station presented. After reviewing the draft plan, these are Seattle Subway’s recommendations for giving feedback on Sound Transit’s DEIS.

Sound Transit must reopen study of the Ballard 20th/Thorndyke Tunnel Portal option. The other DEIS options fail to serve Central Ballard and are hemmed in  by industrial zoning that is unlikely to change. Ballard doesn’t need to rely on Transit Oriented Development to make a station work; it already boasts a desirable, populous urban destination. Ballard’s biggest and most productive small business strongholds along 24th and Ballard Avenues aren’t moving. This station is the only Ballard station in ST3 and is likely to be the furthest west Ballard station in the system forever – Sound Transit needs to get it right.

Neither 14th or 15th serve Ballard well, 20th Avenue is in the center of the urban village

Interbay Station must be built to ensure a tunnel is possible to a 20th Ave NW Station in Ballard. As such, we prefer the Thorndyke Retained-Cut station option.

Like Sound Transit, we also prefer the preferred Galer Street Station option. It offers the most direct pedestrian connection to the Ferry Terminal and Elliot Bay Trail (but we’d like to see pedestrian connections further improved), the best location to connect with buses from West Magnolia, and a cool $200 million in savings over the other options. Currently it lacks the most direct access to Expedia’s campus, but building a strategically placed pedestrian bridge would bring riders to Expedia’s true campus front door in a way the other options never could.

At 110 feet deep, the proposed Mercer station is just too deep. Though the 85 foot deep Republican Street proposal isn’t ideal, it’s not so deep that properly operating escalators would fail riders like a Mercer station would. Arts stakeholders representing the likes of KEXP, Seattle Rep, Intiman Theater, and Macaw Hall/PNW Ballet have expressed strong opinions against Republican Street station due to long construction impacts and tree removal along August Wilson Way. We want Sound Transit to further review if there is a way to mitigate these impacts while primarily focusing on serving future transit riders as well as possible.

Recommended Feedback:  Prefer Republican Street Station and work to mitigate impacts to arts organizations as much as possible.

Neither SLU station option serves the neighborhood well and the Mercer Street option isn’t even in SLU at all. Failure to locate a SLU station as advertised to voters in 2016 within the neighborhood boundaries could even be considered grounds for transgression against voter promises. Luckily there is a better option that serves SLU and will likely be cheaper and faster to build: Westlake Avenue.

Keeping the station on Westlake Avenue in the heart of SLU will enable a shallower crossing of SR-99/Aurora Avenue without the negative implications of a station there. A north/south station would make building for expandability easier as well. We’ll leave it to Sound Transit to find a specific solution, but a different station location that intends to serve South Lake Union is worth additional study.

Recommended Feedback:  Reject both presented options, study a Westlake or similar alignment oriented north/south within SLU boundaries and as centered on South Lake Union as possible.

Direct bus and streetcar connections, a central location, and proximal access to all of Denny Triangle including Amazon headquarters towers makes Westlake Avenue Station the best option of the two. However, the station is still too deep and overbuilt at 100 feet, which surprises us because the station lies directly under (what should be) a fairly unobstructed street right-of-way.

Similar to Denny Station, one option is the clear winner but it’s still not good. Tunnel 5th Avenue Station [DT-1]. As we note in our transfers post, this station has slow transfers and detailed options for this location seem oddly under-studied for a station that expects over 70,000 daily riders.

Recommendation: 5th Ave Station [DT-1]. Update the elevator and escalator plan to improve ease of use and redundancy and additional find ways to speed up transfers and surface access.

Midtown Station is so deep (between 140 and 170 feet) that making it useful will be a challenge.  A station in this location needs to be just as good for short trips within downtown as it is for long distance commuting. Our deep stations article notes that stations over 100 feet deep need to use fast elevators that skip mezzanine transfers and go directly to the platform surface. Sound Transit responded in a blog post that direct station access isn’t possible due to the line being directly under 5th avenue.  This seems to assume that it’s either not possible to go under buildings at this depth or the platform has to be in the center.  Our follow up questions have not received a response as of this writing. What happens at midtown seems to largely depend on what happens with CID station, so our recommendations are general.

Recommendation: Make the station as shallow as possible, design station for surface to platform elevators, build in ample elevator redundancy, and use modern interfaces to ensure nearly seamless elevator use.

Chinatown/International District (CID) Station is the Puget Sound’s single most important central station for its confluence of multimodal connections and transfers. Of the options presented, the best option is 4th Avenue “Shallow Alt (CID-1a)” but we can’t recommend it due to the excessively long transfer times. 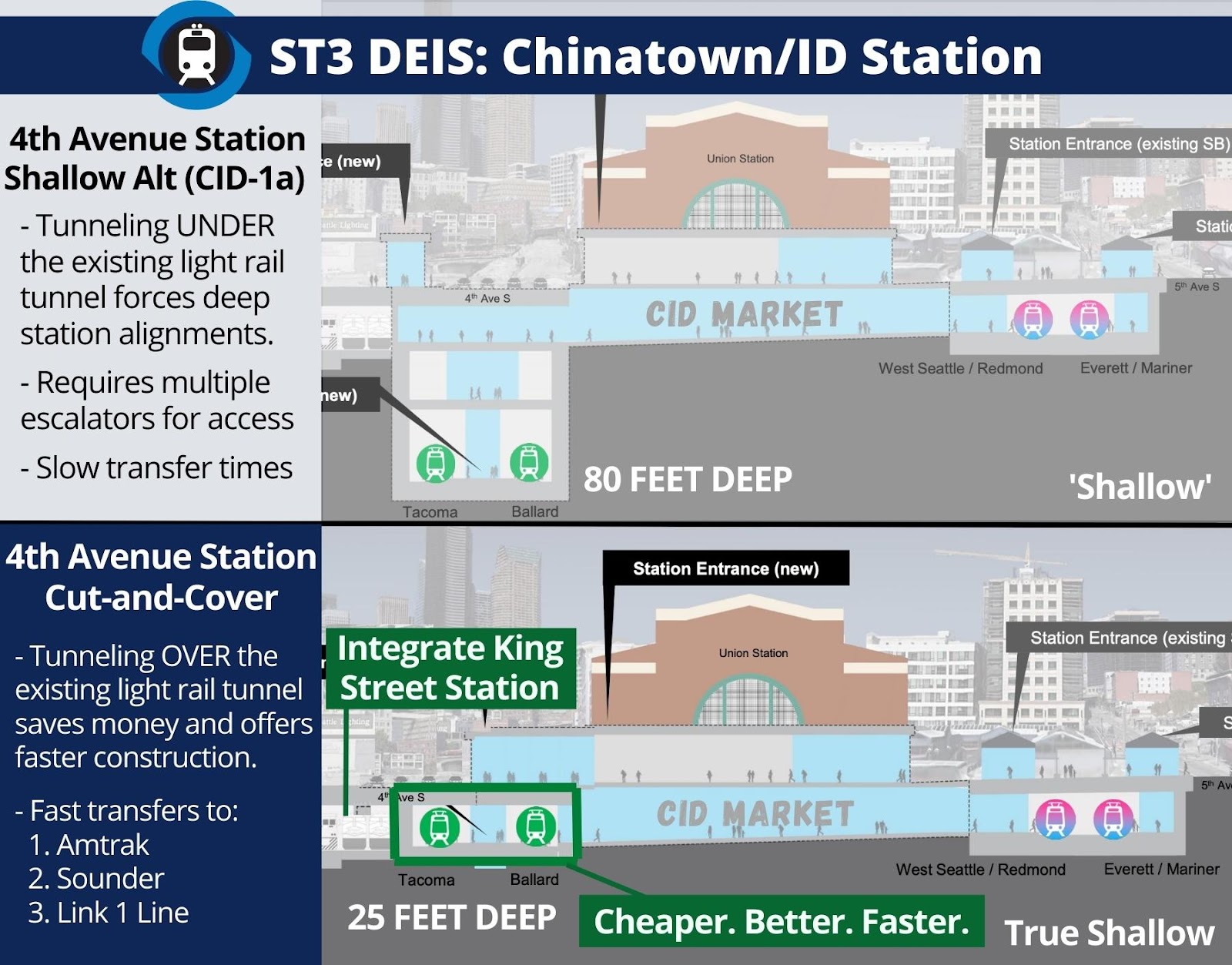 A tunnel just as shallow as the existing CID Station along 4th Ave could be the best option that gets everyone aligned. If Sound Transit can find a way to do it, it would mean fast transfer times for riders, lower impact to the community around the CID, and likely lower costs and shorter construction timelines. We implore Sound Transit to focus on finding a way to make this potential win/win/win happen at this critical transit station and regional transportation hub.

We prefer Mixed Profile Station (SoDo-2) for its preservation of the SoDo busway (50-70 buses/hour), lack of an awkward car overpass, and legible direct transfers for all riders. However, we want Sound Transit to study a Mixed Profile Station further north at the existing SoDo Station location to prevent demolishing the Post Office at great added expense.

We are only discussing West Seattle’s three stations in one section because of the great degree to which each station directly affects what’s possible for the other. Alaska Junction affects Avalon specifically and Avalon affects Delridge specifically.

When it comes to the Alaska Junction and Avalon Station relationship, there is no better option than WSJ-5 41st Ave Medium Tunnel Option [WSJ-5]. It gives West Seattle the tunnel it wants, the centrally located stations it wants, and the shallow stations riders need – while maintaining price parity with elevated options. The only unfortunate aspect of WSJ-5 is that Sound Transit includes only one compatible option for Delridge Station: DEL-6, which is far from ideal. DEL-6 abuts a large steel plant and offers mediocre bus connections. Bus connections are perhaps the single most requested feature of a Delridge Station and must be excellent.

With a fresh crack at this engineering challenge, we are confident Sound Transit can finagle more and better options for Delridge than DEL-6 alone that can be compatible with WSJ-5.

Recommendation: Choose WSJ-5 with a request to study better DEL-6 that are compatible with WSJ-5.

That wraps up our recommendations for this phase of the DEIS.  We again implore transit-focused community members to give Sound Transit your feedback.  Your efforts are essential to building a system that works for riders.  We’ve created this easy to use Action Network form if you want to echo our comments or even if you just want to use our comments as a starting point.  This is a critical moment and we’re still hopeful that Sound Transit can rise to the challenge and design a system that lives up to the promise of ST3.