This is the first of three posts in our series about the latest designs for the West Seattle and Ballard Link extensions. This post covers Ballard and Interbay.

Sound Transit still has a  variety of options for the most crucial segment of the Ballard line: the Market Street station that will serve Ballard’s urban village. END_OF_DOCUMENT_TOKEN_TO_BE_REPLACED

When you have no room to turn a bus around…

The Federal Transit Administration approved $2.6 billion in Capital Investment Grants funding this week, including $100 million for the Lynnwood Link Extension. The installment in the second granted to Sound Transit for the project, but can’t be used until the signing of a full funding grant agreement (FFGA) between the FTA and Sound Transit, which has slipped past its scheduled summer 2018 date.

The project’s $2.77 billion baseline budget relies on a heavy federal contribution of $1.17 billion, which would be released in installments by the FTA. Sound Transit reports that it is working with the FTA and the state’s congressional delegation to complete the FFGA by the end of the year, which would allow for a trouble-free January 2019 groundbreaking as set in the baseline schedule.

END_OF_DOCUMENT_TOKEN_TO_BE_REPLACED

On Wednesday, Sound Transit released the latest design work on the West Seattle and Ballard Link extensions. We’ll have more detailed analysis of each segment next week, but here are the major takeaways from the presentation.

ST staff opened the meeting with a warning about cost control, which is an increasingly common refrain from agency leaders. ST has drawn bad press and scrutiny from the legislature for growing project budgets.

“A note about cost constraints,” Cathal Ridge, ST’s central corridor director, said at the beginning of the meeting. “We’re getting this on some of our other projects, where we’re feeling cost pressures, and I want to head this off—the ST3 plan was back in 2014, and we have seen a lot of recent escalation in construction costs and real estate costs. That has affected the estimates for some of our other projects. That’s a real thing, and I don’t expect it will surprise anyone.”

How those concerns might affect West Seattle and Ballard aren’t clear. Agency staff presented a slide deck with some dollar amounts that indicate an increase in cost (i.e. +$100 million) or cost savings (-$100 million) for the alignment the dollar amount describes.

END_OF_DOCUMENT_TOKEN_TO_BE_REPLACED

A twitter thread, since deleted, questioned which dollars the new Center City Connector cost estimates were expressed in. If the study counts year of expenditure (YOE) dollars, then simply deferring the project balloons the cost.

Absolutely obsessed with questions about YOE vs. constant dollars during the ST3 campaign, I was embarrassed not to think of this question myself. The Mayor’s Office responded like this:

Although the wording is unclear, it describes YOE dollars. The CCC is a relatively short project, so YOE doesn’t transform the numbers. The study summary is actually quite specific that delaying completion to 2022 accounts for $8m of the $54.8m capital cost increase. This is roughly in line with construction costs delayed for two years at 5% inflation ending up at $83m.

In the ST3 debate, these questions mattered a lot. Thanks to the long timeline, different units resulted in huge differences in headline figures in the context of a campaign. For the CCC, I’m not sure it matters. Apportioning blame is a fun parlor game. But most of the funding streams are fixed, so regardless of the cause, supporters will have to find the money somewhere. 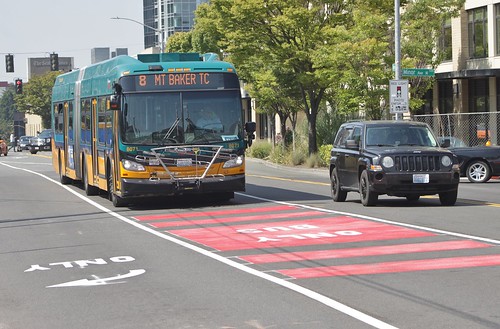 Sound Transit will brief the public and stakeholders on the latest West Seattle-Ballard concepts tonight, and what it shows could make a ruckus. So far, ST has tipped a preference for siting the Chinatown station and segment on 5th Avenue South. But a coalition of neighborhood groups and transit advocates is rooting for a 4th Avenue station and alignment.

Maiko Winkler-Chin, the executive director of the Chinatown/International District Public Development authority (SCIDPDA), is one of the community leaders arguing for the 4th Avenue alignment. The First Hill streetcar project made the neighborhood’s businesses and residents wary of rosy government agency claims about construction impacts.

“For me, my responsibility in the neighborhood is to make sure that we don’t suffer big impacts, or we don’t suffer impacts at all,” Winkler-Chin says. “This neighborhood has dealt with a lot of transportation impacts. I don’t know if people know how bad it was to have the First Hill streetcar built in this neighborhood. I was told that was going to be like a paving project. That as a paving project that never seemed to end.”

“We had an electrical cutoff in the neighborhood, for 15 or 16 hours. We had multiple water cutoff notices—attempts at water cutoffs, and actual water cutoffs. The timing and coordination of doing that sort of work is really difficult because of the unique nature of the businesses down here.”

Winkler-Chin says that some restaurants in the neighborhood were surprised when their water and electricity went out, and says that retailers suffered major drop offs in business due to sidewalk and street closures.

Winkler-Chin says that Little Saigon’s retailers were hit particularly hard. Construction crews closed the 12th and Jackson intersection during the lunar New Year. That’s one of the Vietnamese diaspora’s most cherished holidays, and the neighborhood’s busiest shopping season. According to Winkler-Chin, Little Saigon merchants didn’t know that the closure was coming, and the closure depressed customer traffic and disrupted deliveries.

Winkler-Chin also points out that the 4th Avenue alignment could reactivate Union Station as a public space and multimodal hub. Transit advocates, neighborhood groups and downtown leaders have long wanted to better integrate Union and King Street stations into the surrounding neighborhoods.

“I’m trying to minimize impacts to this neighborhood,” Winkler-Chin says. “Other people want a vibrant and functioning Union Station. If we could do both, that’s great.”

Frank and I will tape another mailbag for our podcast as early as Wednesday night. Please fill this comment thread with your questions in the next day or so.

We’re hungry for more. Or rather, the electorate seems hungry for more. Let us know who the transit, urbanist land use, and climate action champions are on the November ballot. Help us make transit’s support at all levels of government great again.

You can register to vote, update your address or name online through October 8. You can also check your registration status, cancel your registration there, or get your personalized voters pamphlet there. Local voters’ pamphlets and TVW presentations are also available online.

In 2017, Metro began a pilot where it allowed employee shuttles from Microsoft and Seattle Children’s Hospital to use nine public bus stops scattered around Seattle, in exchange for a fee. Aside from money, sharing stops might improve inter-system transfers and foot traffic. But beyond global concerns about how the shuttles impact public transit ridership, the local concern is that shuttles might cause delays at these stops. A UW/UC Davis study used Metro’s real-time data to measure the impact of the pilot on reliability data six weeks before and after the pilot began.

You can see that none of these stops are particularly saturated to begin with:

The quickest summary is that shuttles didn’t make much of a difference at all. The raw on-time data suggest things got a bit worse, but that data did not control for other reliability issues. When the study applies those controls, the effect disappears. When the study applied advanced statistical techniques to individual stops, they found a small negative impact on Stop B. Notably, this stop has only one bus length of space.

The study recommends expanding the program at other “low volume” stops. It’s good news that sharing stops provides a few benefits without causing significant problems. But it’s intuitive that quiet stops could stand to take a few more buses. It would be far more interesting, if riskier, to try this out and some of the really busy stops in the system and understand what the limits of this program are.

The all-door boarding challenge: equal time ? at getting on the bus, SF vs NYC #SlowSummerVidSpecial pic.twitter.com/THZJk4cymL

In a classic holiday-Friday news dump, yesterday afternoon Mayor Jenny Durkan’s office released a summary of the long-awaited third-party report on the Center City Connector. The summary, prepared by Big Four accounting firm KPMG rather than a consultant with specialized transit expertise, brings both good and bad news for the CCC project.

The headline number that drove immediate coverage, total capital cost, is definitely bad news. KPMG’s estimate is sharply higher than previous ones. For the project as planned before the Mayor’s March stop-work order, the total capital cost is now estimated at $252 million, up from $198 million projected in fall 2016. KPMG also studied a scenario where the CCC operates with lower peak frequency, reducing vehicle requirements, and found that the capital cost was not much lower, at $242 million. The city has not yet identified any funding source to cover the difference in the event that the project goes forward. The summary breaks down the increase into a few broad categories, but it is difficult to tell from the chosen categories how much of the increase is attributable to planning errors by the city and how much stems from the sharply more expensive construction environment that has also bedeviled Sound Transit and private projects throughout the area.

The sharply increased capital cost weakens the argument previously made by some CCC supporters that the cost of canceling the project is almost as high as the cost of building it. The report identifies the capital cost of a no-build option, including needed utility work and already-completed design and planning work, as $55 million. FTA has tentatively committed a further $75 million, which the city would most likely lose if the project weren’t built. The difference in expected capital spending between the no-build and build options is now $122 million, roughly twice as much as expected using previous estimates. END_OF_DOCUMENT_TOKEN_TO_BE_REPLACED